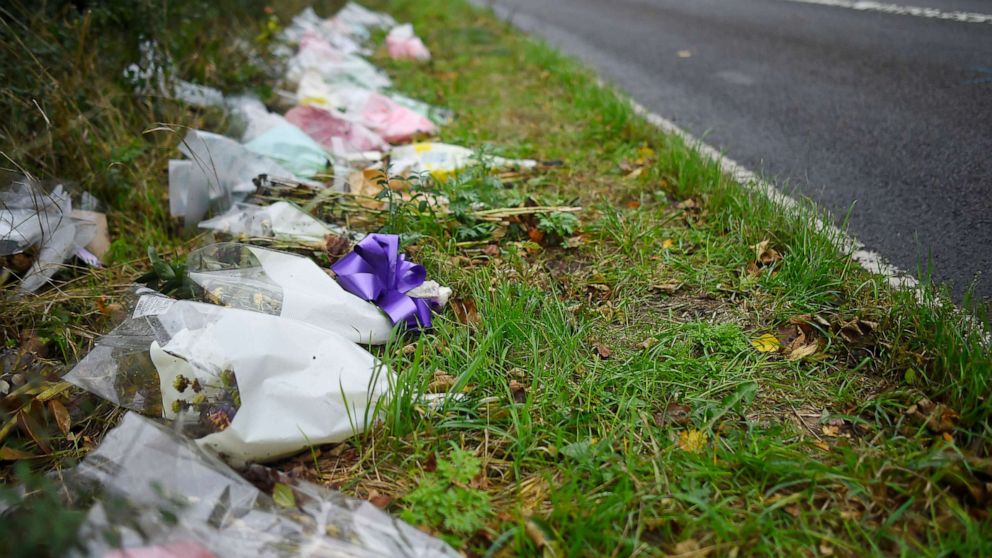 ABCNews
By BRUNO ROEBER
LONDON -- The parents of a British teenager who was killed in a crash involving the wife of an American diplomat are calling on the woman to return to the United Kingdom and "face up to what you've done."

Tim Dunn and Charlotte Charles sat down with ABC News in London on Tuesday for an emotional interview, in which they talked about their late son, Harry Dunn, whom they described as "free spirited" and "full of love."

Harry was riding his motorcycle along a roadway in the village of Croughton, England, on the night of Aug. 27, when a car traveling in the opposite direction on the wrong side of the road hit him head-on. The 19-year-old was taken to a hospital in the nearby city of Oxford, where he died soon after, according to Northamptonshire Police.

Harry's father recalled arriving at the scene of the crash and seeing paramedics attend to his son, who was critically injured.

"I managed to speak to him a couple times to try and reassure him. Then they sedated him and went off to hospital," Tim Dunn told ABC News. "It was horrible to see it."

The parents said they were told by police that the driver of the car had admitted guilt at the scene and in a subsequent interview with detectives. When asked for comment, a police spokesperson told ABC News that they couldn't provide any details due to the ongoing investigation.

"It was pretty obvious what had occurred. Her car was completely on Harry's side of the road," Charles told ABC News.

"She was on the wrong side of the road," Tim Dunn added. "It was her fault."

The crash occurred less than a mile down the road from Royal Air Force Croughton, commonly known as RAF Croughton, which is a British military station that houses an intelligence-gathering base operated by the United States Air Force.

Police said the driver was a 42-year-old American woman who is "being treated as a suspect" in the fatal crash investigation. A spokesperson for the U.S. Department of State confirmed she is "the spouse of a U.S. diplomat assigned to the United Kingdom."

Police have not officially named her. However, the British prime minister has identified her as Anne Sacoolas.

Sacoolas fled the United Kingdom after apparently claiming diplomatic immunity, which protects diplomats and their family members from prosecution or lawsuits under the host nation's laws.

Northamptonshire Police superintendent Sarah Johnson said the woman left the country after allegedly telling investigators she had no plans to do so in the near future. Police intended to arrest and formally interview her, and they are "now exploring all opportunities through diplomatic channels to ensure that the investigation continues to progress," according to Johnson.

While speaking to reporters Monday, British Prime Minister Boris Johnson called Dunn's death a "tragic loss" and said he would personally raise the issue with President Donald Trump if Sacoolas does not return soon to face the U.K. investigation.

Trump confirmed he spoke with Johnson Wednesday evening at an unrelated press event, and said he discussed the Dunn case, calling it "a very, very complex issue."

"We're going to speak to her very shortly and see if we can do something where they meet," Trump said.

"You know, those are the opposite roads, that happens," he added. "I won't say it ever happened to me, but it did. When you get used to driving on our system and then you're all of a sudden on the other system, where you're driving, it happens. You have to be careful, very careful."

The U.K. had previously acknowledged the two talked in a readout of the phone conversation.

"The two leaders also discussed the tragic death of Harry Dunn," Downing Street said in a readout of the call. "The Prime Minister urged the President to reconsider the US position so the individual involved can return to the UK, cooperate with police and allow Harry's family to receive justice."

"The President said he was fully aware of the case and deeply saddened by what has happened, and he expressed his condolences to Harry's parents," the readout continued. "The leaders agreed to work together to find a way forward as soon as possible."

British Foreign Secretary Dominic Raab met with the U.S. ambassador to the United Kingdom, Woody Johnson, on Tuesday and urged the U.S. "to reconsider its position and do the right thing by Harry Dunn's family," according to a statement from the U.K. Foreign and Commonwealth Office.

Harry's parents said they were "shocked" to learn that the woman had left.

"It's hard to understand, for me personally, how anybody could -- even though being an accident -- actually kill somebody, but then up and leave and just walk away from it," Tim Dunn said.

The matter is making it difficult for the family to find closure.

Harry's mother then made a direct appeal to Sacoolas, urging her to return to the United Kingdom.

"Just face up to what you've done," she said. "I can't see how you can move on with your family and your life, without facing the family that you've destroyed."