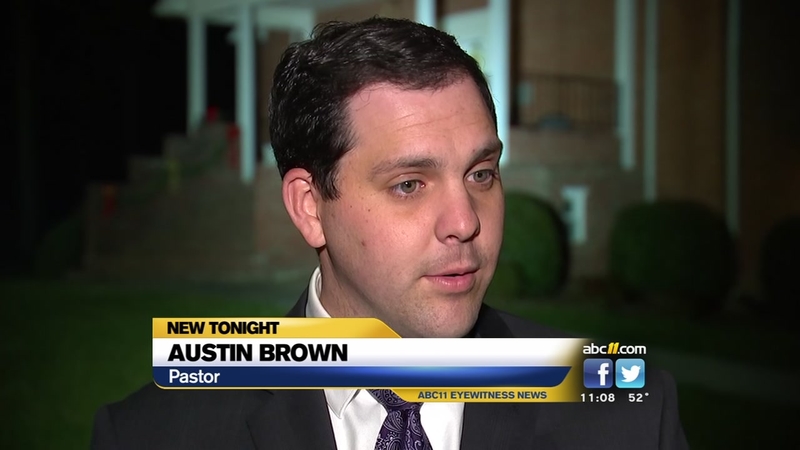 HILLSBOROUGH, North Carolina (WTVD) -- A pastor is thanking the Lord for protection and is grateful for the training he received for his concealed-carry permit.

Pastor Austin Brown had quite the scare Thursday afternoon.

He was alone working in his church, Five Forks Baptist Church off Highway 86 in Hillsborough, when he heard a rustling noise down the hall.

"I cautiously proceeded to where the noise was coming from, which was our church office, and that's when I confronted the suspect, who I did not recognize, and pulled my gun at that time," Brown said.

With his gun on full display, he said the suspect only said "don't shoot" and ran past him to get away.

"I did fire one warning shot, not at the suspect, never once did I intend to hit the suspect, I just wanted him to stop," Brown said.

He then shot at the suspect's tire.

A few miles from the church, the Orange County Sheriff's Office said the suspect, later identified as Cory Vondell Bradshaw, was forced to pull off the road with a flat tire.

At 11: man breaks into an Orange County church but finds the pastor inside with a gun, ready to protect himself #ABC11 pic.twitter.com/e3JXlT5jFZ

Deputies said he tried to hide his car at an abandoned golf course on McDade Store Road. Sgt. Brandon Lassiter happened to be looking for Bradshaw in the area and spotted him with a spare tire in his hand.

Bradshaw ran off into the nearby woods near Cedar Grove. Eventually, deputies found him about 5 p.m. near the intersection of Carr Store Road and Compton Road.

Brown said that through deputies, Bradshaw also sent an apology.

Brown said he's just glad no one was hurt and said Bradshaw is more than welcome to come back to his church as a parishioner.