McCrory reflects on legacy as governor, his future 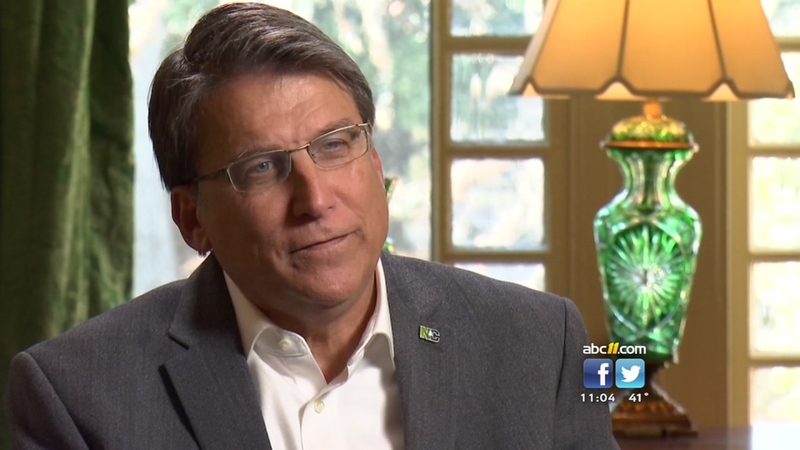 RALEIGH (WTVD) -- The North Carolina race for governor was a tough race and one that spent almost a month in protests and recounts after Election Day.

On Thursday, Gov. Pat McCrory sat down with members of the media to talk about what went right during his time in office and what went wrong.

"We've just been doing our job," said Gov. McCrory on what has been happening since he conceded the election. He said he and his team haven't skipped a beat and they've been focusing on the time he has left and the work he still needs to do.

This last year has been full of challenges. Hurricane Matthew brought more than 20 deaths in North Carolina and devastating floods. Wildfires burning in the western part of the state devoured hundreds of thousands of acres. The governor's handling of these state emergencies had supporters singing his praises. During the summer, he signed a $22.3 billion state budget.

The governor, a Republican, said that budget beefed up the state's rainy day fund which would come in handy for disasters we didn't know were coming yet.

He pointed out the increase to teacher pay, middle-class tax cuts and improving mental health services. McCrory said accomplishments he's proud of were overshadowed by HB2.

"I don't think every city and town in the United States should have their own rules regarding how we deal with sexual orientation."

He said that should be a federal issue and that the push to fight against him from the left really started when he took office.

"Probably well over 20 million dollars that's been targeting me for a three year period. And listen there was a targeted campaign against me from day 1," McCrory said.

His time left as the 74th governor of North Carolina hasn't just been full of rebuilding from disasters and several extra special sessions in the General Assembly.

Three weeks ago he was called to Trump Tower for a meeting, but he's not ready to elaborate on what that could mean.

WOULD MCCRORY BE A GOOD FIT IN THE TRUMP ADMINISTRATION?

"I need to give myself some time for me and my wife to make the right decision," he said.

McCrory said part of that decision process includes deciding on whether they want to stay in North Carolina, go into the private sector or possible run for governor again or even another office.