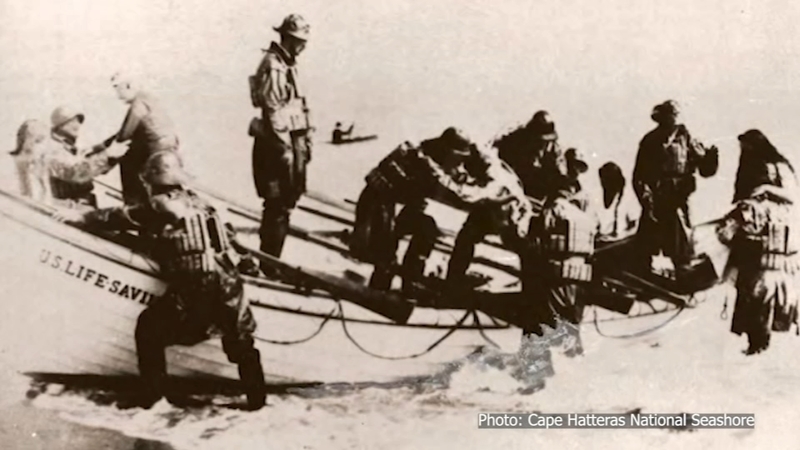 OUTER BANKS, N.C. (WTVD) -- Before the modern-day U.S. Coast Guard, lifesaving stations along the coast were the only lifelines for captains and their crews, especially when navigating the treacherous Outer Banks. And in the late 1800s, one group of men cemented their place in history.

It was along the shores of the Outer Banks, Richard Etheridge and his crew saved hundreds of lives while paving the way for other African Americans.

"It's just amazing to me, you know? They did what they did in the time that they did it. And they did it in an atmosphere when they were not appreciated by most," said Joan Collins, Pea Island Preservation Society director of outreach and education.

Joan and her first cousin Darrell Collins said their history and roots run deep in the water and in the sand.

Their family has a combined 400 years of service, dating to the crew of the Pea Island Lifesaving Station

"Think of it -- you're at sea in the 1800s, before modern technology exists. Nothing is motorized. So how would you be saved? There was the United States Lifesaving Service," Joan said.

Known as the Graveyard of the Atlantic because of numerous shipwrecks, the Outer Banks alone had 29 lifesaving stations. There were 300 nationally. But only one -- The Pea Island Life Saving Station-was made up of an all-Black crew. The station was led by the first Black keeper, Etheridge. Born a slave in Virginia, Etheridge was taught to read and write. As a child laborer, he worked alongside his owner who was a commercial fisherman.

"He could navigate the shallow waters of the Pamlico Sound through the inlets and the ocean. He could read the weather and the tides. And little did he know that all of this would prepare him for later in life when he'd become the first African-American keeper," Darrell said.

"Even in the historical record, you will see language by people that recommended him, 'he's the best surfman there is on the coast -- black or white,'" Joan said.

As the keeper of the station, Etheridge led his crew to make one of the most heroic rescues on record in 1896.

"It was during hurricane conditions. The wind was blowing almost 100 mph. You had 20-30 foot waves breaking on the shore. Richard Etheridge asked for volunteers and immediately two men stepped forward -- Theodore Meekins and one of my relatives, Stanley Wise," Darrell said.

In the middle of the night, the crew was able to save all nine people on board the E.S. Newman, including the captain, his wife, and their 3-year-old son.

"Do you think any of them cared to be rescued by an all-black crew? Do you think that matters when a black hand reaches out of the water to save that child?" Joan said.

The only recognition the crew received during their lifetimes would be the signboard from the side of the ES Newman. After washing ashore more than 125 years ago, it now hangs on the wall at the Pea Island Cookhouse Museum in Manteo. Full of lifesaving tools and relics, the actual museum building once sat next door to the lifesaving station. It is where the crew would dine together.

"If these floors could talk, there'd be so many amazing stories that they could tell. But this is truly an American story. It embodies all the characteristics that make America great," Darrell said.

An American story that Joan and Darrell will continue to tell because it is also their history.

"It instills a sense of pride and honor to know that these men were trailblazers for other African Americans to follow in their footsteps," Darrell said.