At least 217 arrested in DC protests of Trump inauguration 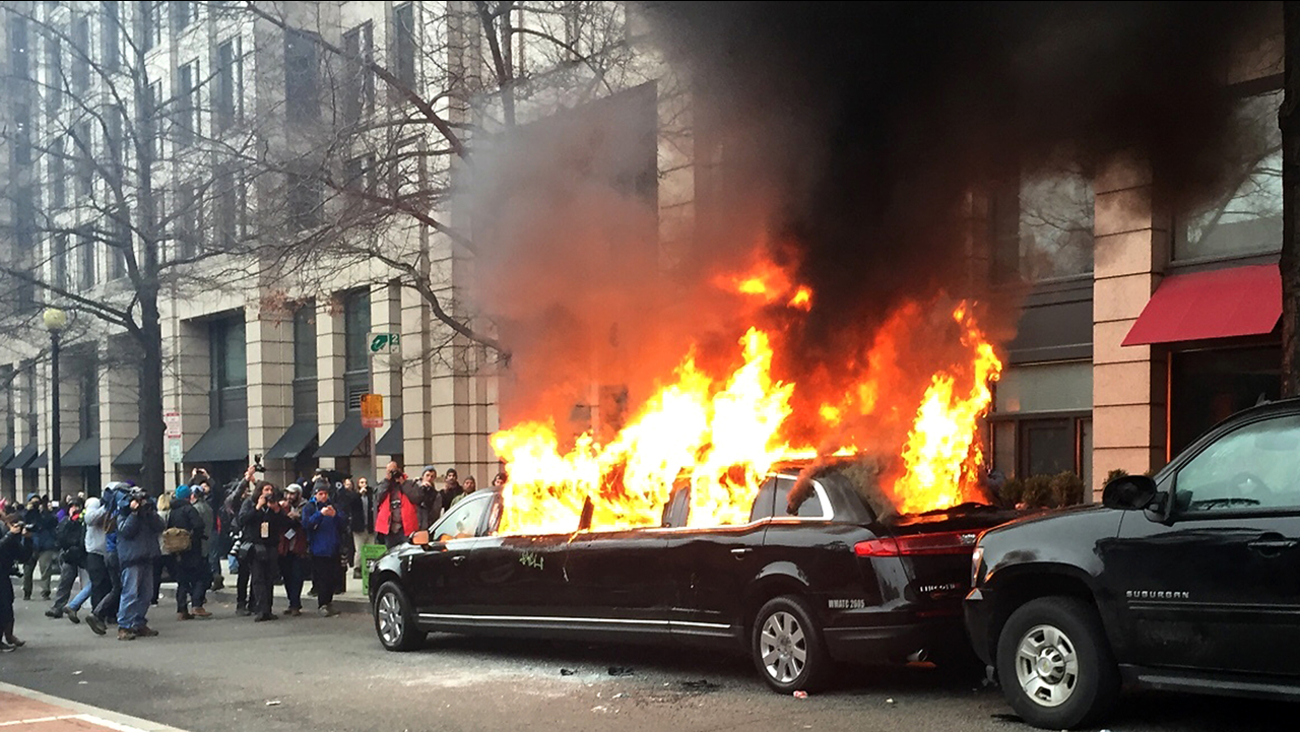 Protesters set a parked limousine on fire in downtown Washington, Friday, during the inauguration of President Donald Trump. (Juliet Linderman)

WASHINGTON -- Protesters registered their rage against the new president Friday in a chaotic confrontation with police who used pepper spray and stun grenades in a melee just blocks from Donald Trump's inaugural parade. At least 217 people were arrested for rioting while a burning limousine sent clouds of black smoke into the sky during Trump's procession.

But about a mile from the National Mall, police gave chase to a group of about 100 protesters who smashed the windows of downtown businesses including a Starbucks, a Bank of America and a McDonald's as they denounced capitalism and Trump. Police in riot gear used pepper spray from large canisters and eventually cordoned off protesters at 12th and L streets in northwest Washington.

"They began to destroy property, throw objects at people, through windows. A large percentage of this small group was armed with crowbars and hammers," said the city's interim police chief, Peter Newsham. 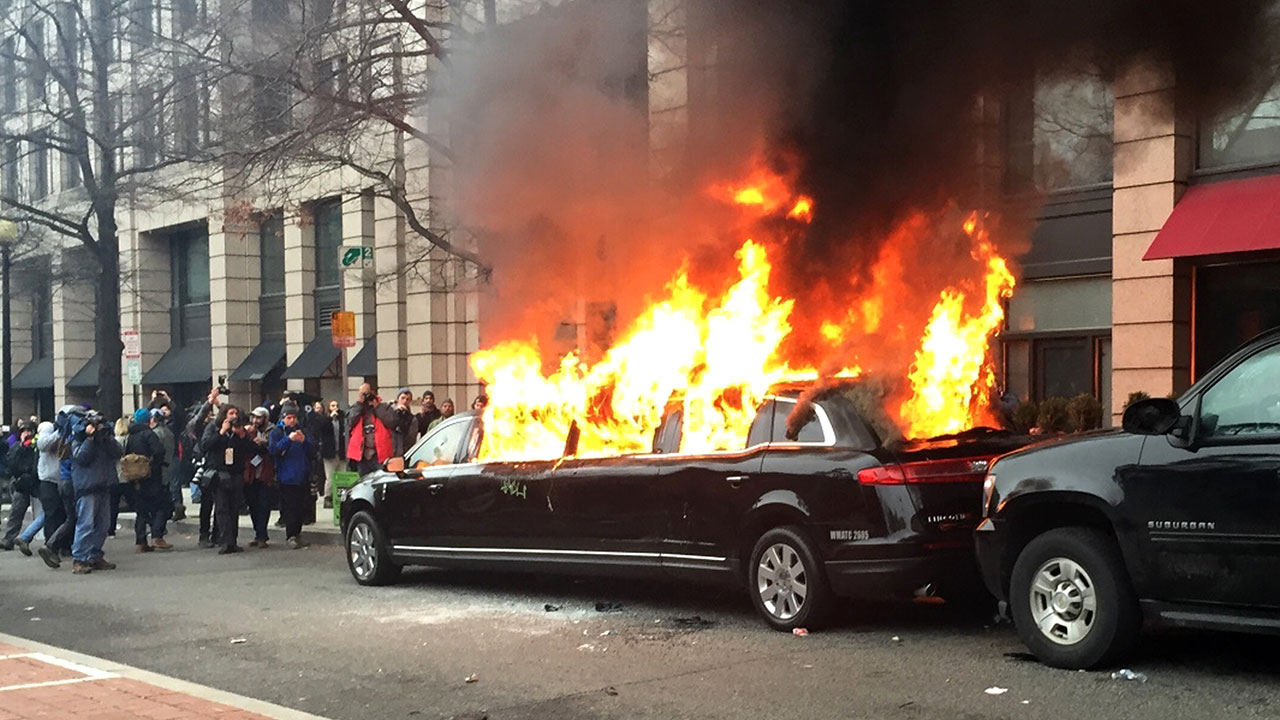 The confrontation began an hour before Trump took the oath of office and escalated several hours later as the crowd of protesters swelled to more than 1,000, some wearing gas masks and with arms chained together inside PVC pipe. One said the demonstrators were "bringing in the cavalry."

When some crossed police lines, taunting, "Put the pigs in the ground," police charged with batons and pepper spray, as well as stun grenades, which are used to shock and disperse crowds. Loud booms echoed through the streets about six blocks from where Trump would soon hold his inaugural parade.

Some protesters picked up bricks and concrete from the sidewalk and hurled them at police lines. Some rolled large, metal trash cans at police.

The limousine was attacked on the perimeter of the secured zone. As Trump and his parade of celebrants moved along Pennsylvania Avenue, the vehicle was ablaze, tainting the air for blocks and sending protesters and passers-by moving swiftly away.

As night fell, young protesters ignited a large bonfire blocks from the White House in McPherson Square. They carried signs like "Hail to the Thief" and hung an upside-down American flag as women in gowns and men in tuxedos passed by, presumably en route to one of the inaugural balls.

Police said protesters damaged vehicles, destroyed property and set small fires while armed with crowbars and hammers. All 217 people arrested were charged with rioting, said Newsham, noting that the group caused "significant damage" along a number of blocks.

Before Inauguration Day, the DisruptJ20 coalition, named after the date of the inauguration, had promised that people participating in its actions in Washington would attempt to shut down the celebrations, risking arrest when necessary.

Trump supporter Brett Ecker said the protesters were frustrating but weren't going to put a damper on his day.

"They're just here to stir up trouble," said the 36-year-old public school teacher. "It upsets me a little bit that people choose to do this, but yet again, it's one of the things I love about this country."

At one checkpoint, protesters wore orange jumpsuits with black hoods over their faces to represent prisoners in U.S. detention at Guantanamo Bay. Eleanor Goldfield, who helped organize the DisruptJ20 protest, said protesters wanted to show Trump and his "misguided, misinformed or just plain dangerous" supporters that they won't be silent.

Friday's protests spread across the nation.

In Nashville, half a dozen protesters chained themselves to the doors of the Tennessee Capitol. Hundreds also sat in a 10-minute silent protest at a park while Trump took the oath of office. Organizers led a prayer, sang patriotic songs and read the Declaration of Independence aloud.

In the Pacific Northwest, demonstrators in Portland, Oregon, burned U.S. flags and students at Portland State University walked out of classes. About 200 protesters gathered on the Capitol steps in Olympia, Washington, carrying signs that included the messages "Resist Trump" and Not My Problem." Olympia police reported about 100 marchers causing some traffic disruptions downtown, and protesters also marched in Seattle.

The demonstrations won't end when Trump takes up residence in the White House.

A massive Women's March on Washington is planned for Saturday. Christopher Geldart, the District of Columbia's homeland security director, has said 1,800 buses have registered to park in the city Saturday, which could mean nearly 100,000 people coming in just by bus.