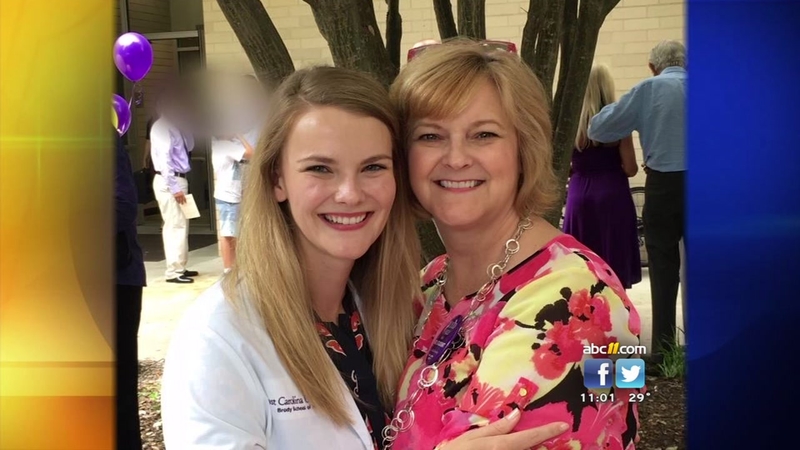 CARY, NC (WTVD) -- A daughter in Cary is mourning the loss of her mother who was murdered Friday allegedly by her father.

Police announced Saturday morning that a Raleigh man had turned himself in for the murder of his estranged wife.

"I just heard several very loud shots. It sounded like a very large gun, like a rifle or something," said Donna Hughes, who lives just across the parking lot that separates the rows of town homes on Collington Drive. "I called my neighbor and said, 'did you hear that?' and he said, 'yes I heard it and I don't know what it was!'"

"She was my very best friend and I love her more than anyone in the world. To know my mom was to love her. Mom's family, friends, and students were so very lucky to know her. My mommy may not be physically with me anymore, but I know that she lives on in the hearts of the many, many people that love her," Allison wrote.


Police say Michele Williams was not listed as a resident in the 1200 block of Collington Drive, but was staying there temporarily.

She was sitting in her car at 6:38 p.m. Friday night when police say David Williams opened fire -- striking and killing her. Several rounds hit nearby homes but no one else was hurt.

David Williams turned himself in to officers working at Cary Towne Center around 7:15 p.m.

"He came over and turned himself in to one of our officers," said Randall Rhyne, captain of Cary PD Criminal Investigations Division. "He just said that he thought we may want to speak to him. That was all the information he gave us."

"My first inclination was gunfire, but then it sounded too tinny, metallic. But it was about a dozen shots. Ten to 12 shots," recalled neighbor Terri Appelboom.
Back on Collington Drive, with police withholding any information about the victim, shaken neighbors were left to worry and wonder.

Police respond after a woman was shot in Cary.

David Williams is charged with murder and was taken to the Wake County Public Safety Center in Raleigh for processing.

Michele Williams was a teacher at Timber Drive Elementary School.

The school released this statement: "All of us at Timber Drive Elementary and our entire school community are deeply saddened by the loss of our dear colleague, our friend, Michele Williams. She was a dedicated, hardworking, and loving teacher who gave her students the gift of her smile each and every day," said Timber Drive Elementary school Principal Kim Burton. "Our hearts go out to Michele's family and friends."