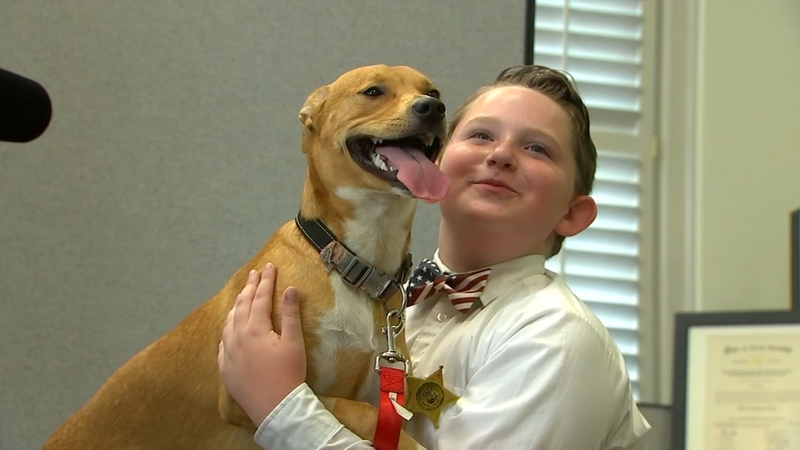 Dog owner meets with deputy who rescued pup from well

SPRING HOPE, N.C. (WTVD) -- A Nash County 11-year-old got the chance to meet the deputy who he calls a hero.

Trey Snow knows that without deputy Brooks Heath, his dog Riley would likely not be with him anymore.

"I just describe her as the best dog in the world," Trey said.

But last Tuesday, the best dog in the world disappeared. Trey let Riley out in the backyard to play, but soon he realized she was gone.

A frantic search, which included Trey running down the street in his pajamas, brought Trey and his father to their neighbor's backyard

They could hear Riley barking--a scary thing to hear because Riley rarely barks.

"She was just barking and barking rapidly and I'm super scared," Trey recalled.

Riley was trapped in an old water well that went down about 10 feet. She was standing on her hind legs, clawing at the wall of the shaft and trying to keep her head above water.

That's when Heath, who was off duty and on his way home, pulled over to help.

Heath and Trey's dad worked together to pull off a last second puppy rescue.

"I pulled the top off the well to try and get her, and I couldn't quite reach her," Trey's father, Marion, said. "So I held his (Deputy Heath's) feet and he reached down in there and got her. And we pulled her out of the well."

A veterinarian treated Riley for exhaustion, head trauma and an ear infection. Riley is making a quick recovery, so much so that her vet took to calling her a "miracle puppy."