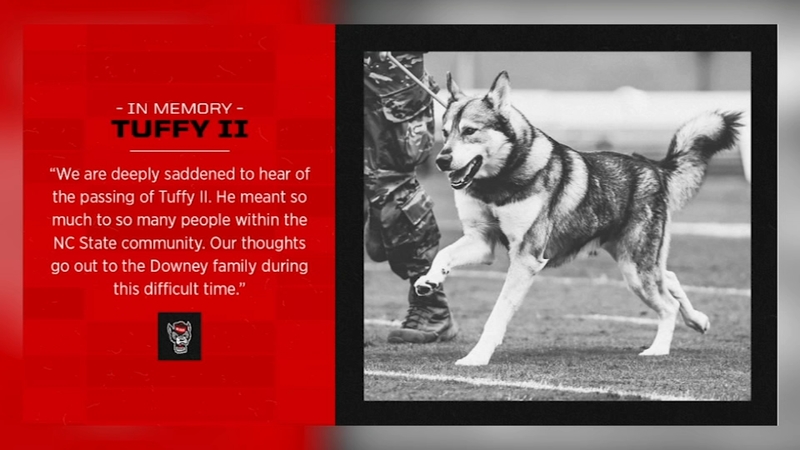 A tweet from NC State athletics revealed Tuffy II died in his sleep.

It is with deep sadness that we share that Tuffy II passed away in his sleep last night. Our thoughts are with the Downey family, Tuffy II left a lasting impact on the NC State community. pic.twitter.com/irvwd3hSfQ

Earlier this week, reports circulated that Tuffy II was fighting a health problem.

Tuffy II had Canine dilated cardiomyopathy, a disease where the animal's heart has problems pumping blood. The NCSU vet school treated him in their ICU.

Joe Downey, part of the family who keeps Tuffy II, left a message on a GoFundMe started for Tuffy II on Monday along with a photo of Tuffy II sitting behind the front door of their home.

"Thanks everyone for being generous enough to donate and/or share, the outreach is overwhelming. Tuffy II is back home and trying to adjust to his medicine regimen. He summoned up the energy to do one of his favorite things, secure the perimeter."

Tuffy II is a Tamaskan dog, a breed that generally resembles a wolf, and was introduced to the NCSU family in 2016.

The GoFundMe started for Tuffy II has already surpassed its goal, raising more than $11,000 as of Tuesday morning.

A cardboard cutout of Tuffy II was placed in the end zones at the stadium among photos of other fans.