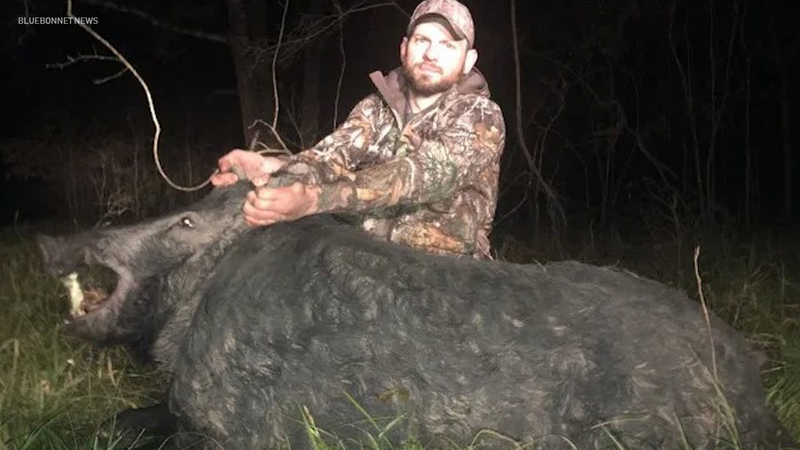 LIBERTY COUNTY, Texas -- A feral hog weighing a whopping 488 pounds was killed on Saturday in a Texas subdivision.

According to a report published by Bluebonnet News, a pair of hunters with Nuisance Wildlife Removal shot the hog, as well as six others that each topped the scales at 250 pounds.

Joel Dudley, owner of Nuisance Wildlife Removal, was hunting the hogs with his friend, Mike Huckabay, when they came across a group of hogs clustered around one of the community's ponds.

"We were in there doing hog eradication because they have become so overpopulated," Dudley said. "They have been tearing up the whole dang subdivision."

Instead of hunting with dogs or using traps, Dudley and Huckabay hunt using thermal-imaging, nighttime vision scopes that allow them to see into the darkness when the hogs are most active.

"We saw this big boar standing around one of the ponds," Dudley explained. "Even at the distance, we could tell he was massive. We went toward him and couldn't find him, so we got back on the ATV and went down another road. That's when Mike got within 20 yards of him and shot him. There was another big one that I was watching with my thermal scope. He got within 10 yards of me. I had to shoot him because, he was coming right at me."

Dudley, who has been hunting hogs in southeast Texas for more than 15 years and has even appeared on outdoor hunting shows, said the boar they killed Saturday was the largest he has ever encountered, though some others have come close.

Dudley said that a certain amount of skill goes into hunting hogs in close proximity, especially with homes nearby.

"I think the thermal vision makes it a lot safer because, we can get within 5-10 yards of the feral hogs," he said. "It works in subdivisions and places like that. Sometimes, the last thing you want to do is try trapping hogs in your community. You don't want to put bait out and draw more pigs to what is already a nuisance area. That's why we go in with thermal scopes. We also use low-caliber ammunition so it won't blow through the pigs. It just drops them where they are standing."

Feral hogs near residential areas are a growing concern in Southeast Texas.

With a population in the state numbering in the millions, dangerous encounters with wild hogs are a real possibility.

In November 2019, a Liberty County woman, Christine Rollins, 59, was killed by wild hogs when she was just feet away from the front door of a Chambers County home where she worked as a caretaker for an older couple.