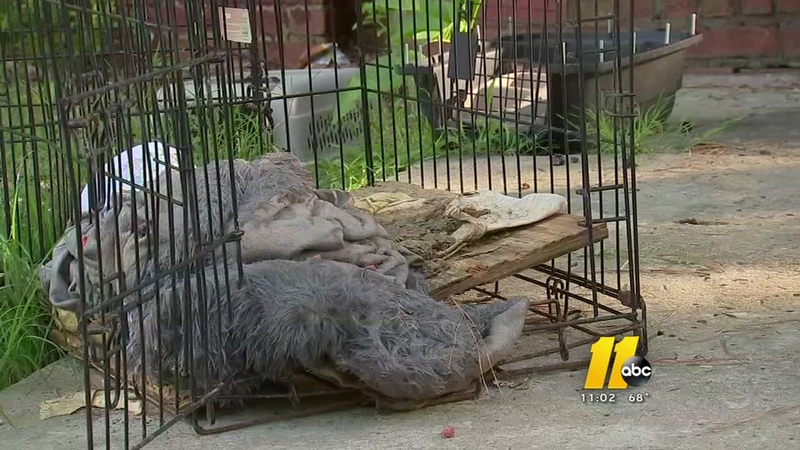 CLAYTON, NC (WTVD) -- When Clayton Police arrived at the home, it was already too late to save the dogs.

"The house was filthy," described Clayton Police Chief Blair Myhand. "There were bugs and maggots ... It was a pretty foul, disgusting scene."

Officers found four dogs in all at the home in the 200 block of E. Stallings Street. They were locked inside cages with no food or water and owners who had abandoned the house - leaving the animals to die.

"Three of these dogs were deceased. One dog's body was badly decomposed. One dog was barely clinging to life," Myhand said.

The lone dog still breathing had to be euthanized not long after.

"I knew it smelled like something bad," said Dylan Zelenka who lives next door.

It was Zelenka who called 911 last Thursday to alert police to the suspicious smell on Stalling Street.

"I said it smells like death over there. You need to get somebody over here," Zelenka said.

Police said Hodges inherited the home from his mother and lived there with a woman, her adult son, and their four dogs.

But, when they all moved out, at least a month ago, they allegedly left the dogs to fend for themselves.

"We actually heard animals inside a little bit after they left," Zelenka said. "I assumed they took them."

Chief Myhand is using the case to remind people about the public resources available if you can't take care of your animals.

"We have an animal control officer, the county has an animal shelter," Myhand said. "Any of those places would gladly take the animal over being left inside an abandoned house to die."

The Clayton Police investigation is ongoing - the chief saying more charges and additional arrests could come.