A criminal charge for not having cat spayed? 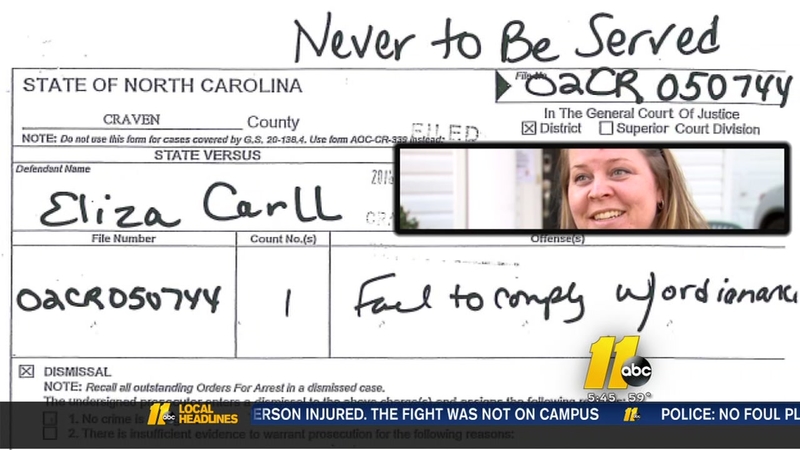 A criminal charge for not having cat spayed?

RALEIGH (WTVD) -- Adopting a pet and not taking the required steps could end up with you being criminally charged.

For the last 15 years, Eliza Rowe has had a misdemeanor on her record, and she says she has not been able to get it taken care of. It started in 2001 when Rowe was a student at NC State. Rowe lived in Raleigh but adopted a kitten from the Craven County Humane Society that she named Sandy.

"Part of the paperwork, if I remember correctly, was that you have a certain time frame to get it spayed," she said.

Rowe said she didn't have Sandy spayed right away but did have her spayed in 2003. After she graduated college, she started a new job and says she was pulled aside by her boss after a background check.

"I had been working two weeks and the operations manager said to me that we are not going to fire you over this but we need to know what this is. I was like, 'I don't know what you're talking about. I've never been arrested. What charges could possibly be on my record?'" Rowe said.

After several calls, she learned the charge was in Craven County and that it was for her not having her cat Sandy spayed in the required time period.

"Why hasn't anyone told me this, phone call, letter, a warrant, anything!" she said.

Rowe had the records from the veterinarian that proved Sandy was spayed in 2003. She says the records were sent to Craven County Humane Society, and she thought everything was fine.

However, like a cat with nine lives, the criminal charge came up again 11 years later. This summer, she was trying to visit a relative at Camp Lejeune Marine Corps base and says she was declined a visitor's pass because she had an active open charge on her record. Rowe says she couldn't believe this charge from 15 years ago was still hanging over her.

"I don't understand why I was charged with something without any notification. Where do I even turn if I have a cat misdemeanor? I have no idea who could possibly help me with this," she said.

Once I heard about Rowe's issue, I got in touch with the Craven County District Attorney and gave him proof that Sandy was spayed in 2003. He took quick action and the charge that loomed over Rowe for 15 years was finally dismissed. He says since Rowe has the proof her cat was spayed, and that she was never served the proper paperwork, he was able to take those steps.

Rowe is thrilled she no longer has to worry about the charge and it's taken care of. Pet adoption guidelines vary from county to county so it is extremely important to read those adoption forms carefully so you don't end up being in a situation like Rowe.
Related topics:
raleighabc11 troubleshootertroubleshooter
Copyright © 2021 WTVD-TV. All Rights Reserved.
ABC11 TROUBLESHOOTER
Ways you can save money next time you rent a car
Man duped into buying Jeep that had 100k more miles than advertised
DOD issues rule on Stayskal Act, will pay claims of medical malpractice
Nearly $75M lost to vacation scams during COVID pandemic
TOP STORIES
In Raleigh, Biden encourages vaccinations, warns about Delta variant
At least 3 dead, up to 99 missing in Florida building collapse
'Scary five seconds': Moore Co. resident recounts bobcat attack
Security camera video shows moment of Surfside building collapse
Why LGBTQ+ terminology matters: ABC11 hosts a virtual discussion
Chapel Hill bar The Library closing just as owner hoped to reopen
UNC Black Student Movement to protest over tenure controversy
Show More
Pet Alert: As dogs roam the yards, snakes may be lurking
What to expect in Derek Chauvin sentencing
Durham man charged in Chapel Hill road rage shooting that injured man
Nonprofit rolls out mobile vaccination units to serve communities
Nearly all COVID deaths in US are now among unvaccinated
More TOP STORIES News