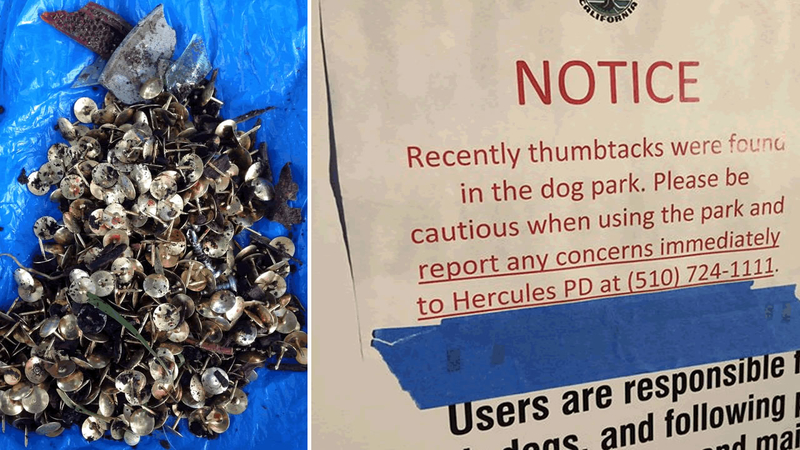 HERCULES, Calif. -- Dog owners are on alert after at least two pets were injured by tacks in a park.

Someone has been leaving hundreds of the sharp objects at Ohlone Dog Park in Hercules, Calif.. Police say it's not just animals that are in danger.

Police say these tacks were intentionally spread around the park and they want to public to report any suspicious activity out there.

Someone is trying to harm #dogs at Ohlone Park @CityofHercules. 100s of tacks tossed in dog park. @Hercules_PD pic.twitter.com/ur7ymzIcwi

Police say on at least two occasions, dog owners discovered hundreds of tacks tossed inside a fenced off play area.

"One of the guys was picking them up and his dog swallowed one and he had to take him to the vet. I'm sure it's not a very nice vet bill," said dog owner Annie Miller.

"Another person, their dog was limping and she put the paw up and there was a tack, not all the way in, but it was in the paw," said dog owner Kathy Long.

On Jan. 30, dog owners first noticed the tacks spread all over the dog park. They picked up piles of them, enough to fill sandwich bags.

"After we've gotten most of them out, then we come back and they're back again," Miller said.

That was last Saturday and they were still finding a few more tacks while we were there. However, it's not just dogs police are worried about.

"A child is very quick with that kind of thing and could have it in his mouth and swallow it before any parent could reach them," said Hercules police Detective Connie Van Putten.

Police aren't sure what the motive is, but they're depending on the eyes and ears of the public to help them catch the person or persons responsible.