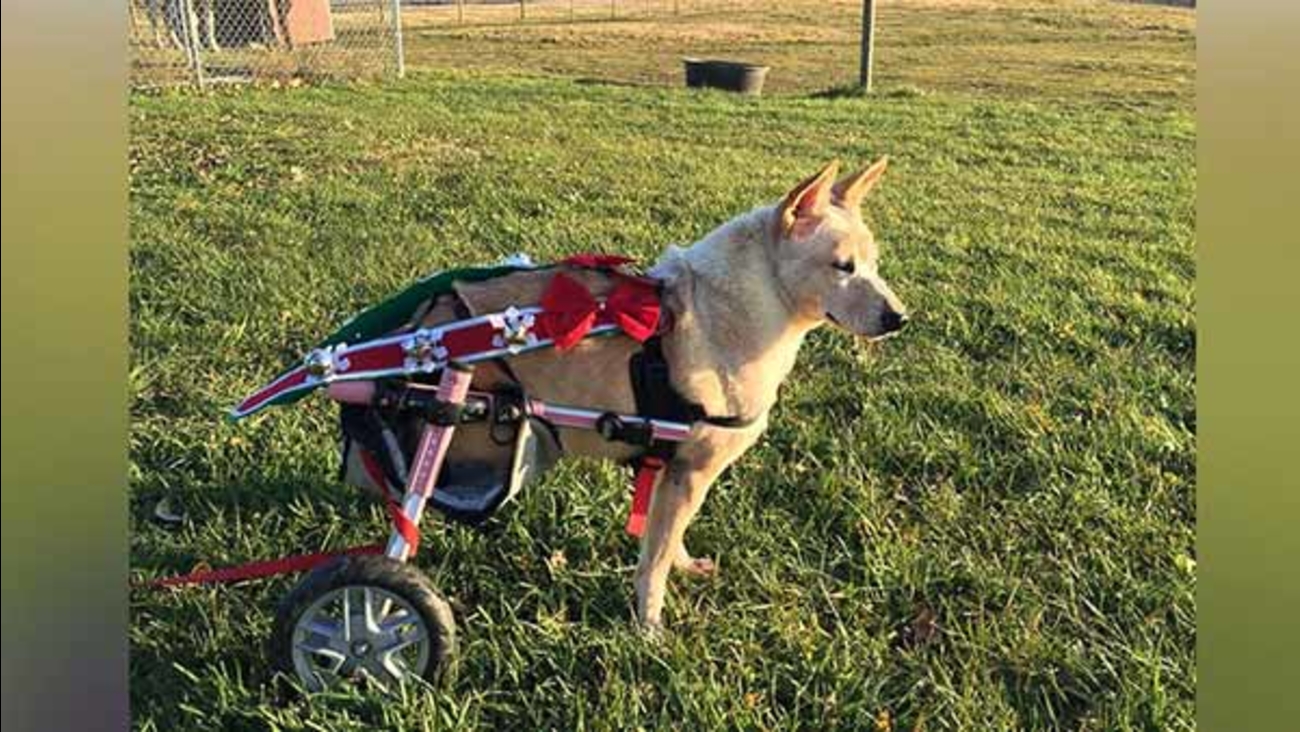 Lucky wouldn't likely be the first word that comes to mind when you see Scooter. After all, she's missing her hind legs, her spine was broken and fused together in sort of a snail-shape, and she's incontinent.

But in many ways, Scooter is lucky. She was initially rescued in Thailand by a group called SOI Dog that refused to give up on her, ABC News reports. Then she was adopted by a woman named Willow Sullivan in New York. Her flight -- which cost $1,200 -- was paid for by donations. She got to meet with a top-notch doctor at Cornell who fit her with a cart. A man in the U.K. named Jason Below, who neither Scooter nor Willow has ever met, paid for the cart.

"It's amazing how one dog has brought a world of people together," Sullivan told ABC News. Sullivan, who rescues elderly and disabled animals "the animals nobody wants," she said, through her nonprofit Willow's Wings.

Sullivan had adopted through SOI Dog once before, and saw Scooter on the organization's Facebook page. She immediately reached out, and despite the obstacles put in her way -- including Scooter being denied exit from Thailand because of numerous open sores on her behind -- Sullivan and the SOI Dog organization persisted. They spent a month clearing all of Scooter's wounds except one -- but that was enough to let her out of the country and on a flight to JFK Airport.

It wasn't the knowledge of Scooter's complex medical history that scared Sullivan, but rather what happened at their first meeting at JFK. Scooter bit her.

"What have I gotten myself into," Sullivan recalled asking herself.

But on the four-hour drive from the airport to Sullivan's home and rescue in Maine, New York, Scooter began to trust. And by the time they arrived, Scooter had found a new home on Sullivan's lap, she said.

But Scooter could never properly heal because she was constantly dragging her bottom around. And she was often sitting in her own urine or feces, leading to swelling and sores. Sullivan took her to Cornell, where Dr. Chris Frye examined her and told Sullivan "he had never seen anything like it in all his life," she said. Scooter was actually worse off than they even originally thought: she had fractured ribs, a fractured femur, neck fractures and a huge spinal fracture.

Plus, the amputation of her hind legs appeared to be a hack job, Sullivan said, noting "the bones were not cut clean, and not in the same place."

Frye fitted Scooter for a chair, and after some trial and error, plus additional ordering of parts, they finally got the right fit.

"At first she just stood there and stood there. Then she took three steps back," Sullivan said. "I called for her, and all of a sudden she walked toward me. Then she wanted out of the exam room. She walked out of the hospital and to the lawn. She strutted like she had been walking forever."

Scooter had to get used to her chair, at first only being in it three times per day for 10 minutes. But now, just weeks later, she is up to two or three hours at a time, Sullivan said.

Scooter and Sullivan have developed a nightly routine: when the cart comes off, Scooter rests in the living room. When she starts to whimper, Sullivan said, she comes downstairs and Scooter scoots over and throws herself on the floor next to her. Then Sullivan does for Scooter what her missing back legs cannot -- she scratches behind her ears and neck.