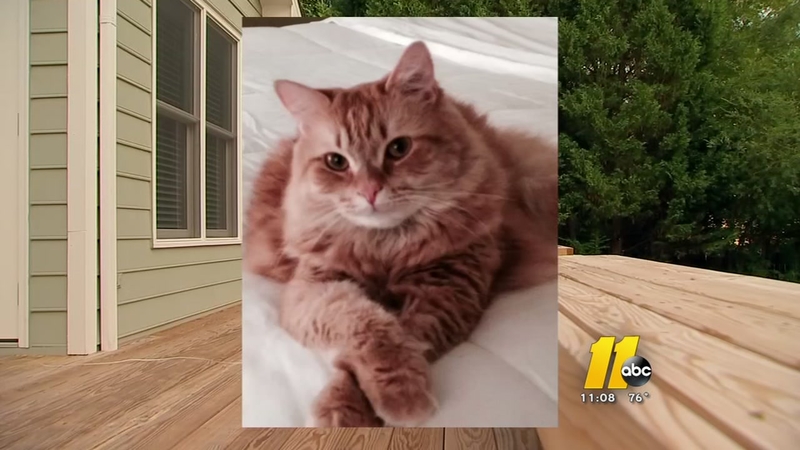 CARY, North Carolina (WTVD) -- A Cary family is hoping their beloved cat found mutilated on a nearby golf course was not the victim of a human.

The family is actually missing two cats and is hoping the other may still be found alive.

Rebecca Witt says the first of her two outdoor cats, Simba, disappeared a week ago.

Then on Saturday, another cat went missing.

Then, on Monday, her husband ran into a worker at the Prestonwood golf course a mile away.

Witt said, "They had found a cat that fit my cat's description, my older cat, Jade."

The worker said the cat wasn't just dead but mutilated.

He said he believed the animal had been attacked by a human with a machete.

But forensic veterinarians tell ABC 11 it was more likely an animal attack.

"It's more consistent with predation. We do have foxes, we have coyotes here in the Triangle area. I have some experience with these cases when I worked in San Antonio, Texas," said Wake County Animal Shelter veterinarian Sandra Strong.

Strong is also trained as a forensic vet.

Although she can't be sure since the cat's body was disposed of, Strong says sadistic human abuse is much less likely than an animal attack.

And she notes that animal abuse by humans is often an indication of the potential for violence against humans.

"That's one of the reasons we always want animal suspected-abuse cases reported, but it's much more rare as opposed to having your cat or chicken or small dog attacked by wildlife," she said.

Rebecca Witt said losing a beloved family pet to a wild animal would be a bad enough fate.

She doesn't even want to consider human abuse.

Now Witt is hoping Simba didn't meet the same fate as Jade and may still be found alive.

And forensic vets say this is an opportunity to remind anyone who finds an animal carcass that appears to be mutilated to notify authorities so that the body can be examined closely.