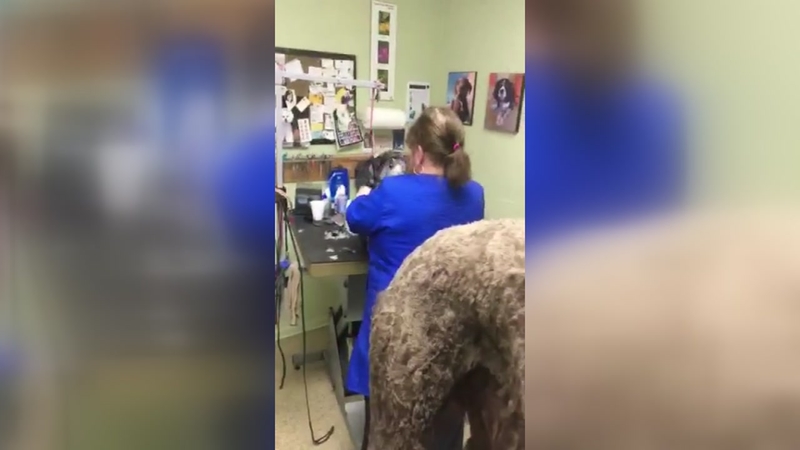 Dog groomer under fire after video of alleged abuse

VENICE, Florida -- A Florida dog groomer is under fire after a video of her appearing to choke a dog went viral on Facebook.

A former employee posted a video of Phyllis Lucca, owner of Happy Puppy Pet Spa, choking a dog and slamming it on the table.

"The dog was picked up by the throat, choked, (shaken) and then his head slammed on the table," said the former employee, Briana Brady.

Brady said the dog did nothing to provoke the behavior.

According to local media reports, Lucca claims the dog had passed out and she was trying to help the animal.

The Sarasota County Sheriff's Office is investigating another case against Lucca.

Two weeks prior to the video, Brady said a dog named Pumpkin left the spa with a broken jaw and bruises all over his stomach.

Lucca claims that Brady was the one responsible.

However, both Brady and Pumpkin's owner, said they believe Lucca was the only one who could've have harmed the dog.

-------------------
ABC11 has decided to slowly reduce the number of stories on the website that have a comments section. We believe very strongly that our audience should have an opportunity to discuss and debate events in our world, however, we have not been able to moderate the comments as well as we would like. Instead of hosting a platform that could allow a few loud and ugly voices to dominate a conversation, we want to encourage everyone to join us on our social media platforms and speak out there. Facebook: facebook.com/ABC11 Twitter: twitter.com/ABC11_WTVD
Related topics:
pets & animalsfloridafloridaanimal abusedog
Copyright © 2022 KTRK-TV. All Rights Reserved.
TOP STORIES
LIVE: Several kids dead after TX school shooting, sources say
Fort Liberty proposed as new name for Fort Bragg
NOAA predicts above average hurricane season, releases storm names
Report finds people of color pay more in rental application fees
New NC flood monitoring system ready for next big storm
US birth rates rises for first time in 7 years
Eateries struggling as Triangle Restaurant Week approaches
Show More
1 dead, brother still missing in Cape Fear River
Thousands lose power after strong storms, flooding possible Tuesday
Suspect arrested after two teens shot in Clayton
Mom hears late son's heartbeat in 14-year-old boy for 1st time
Amber Alert canceled, 7-year-old found safe
More TOP STORIES News