Why are some kids such picky eaters? Simple solutions worth trying 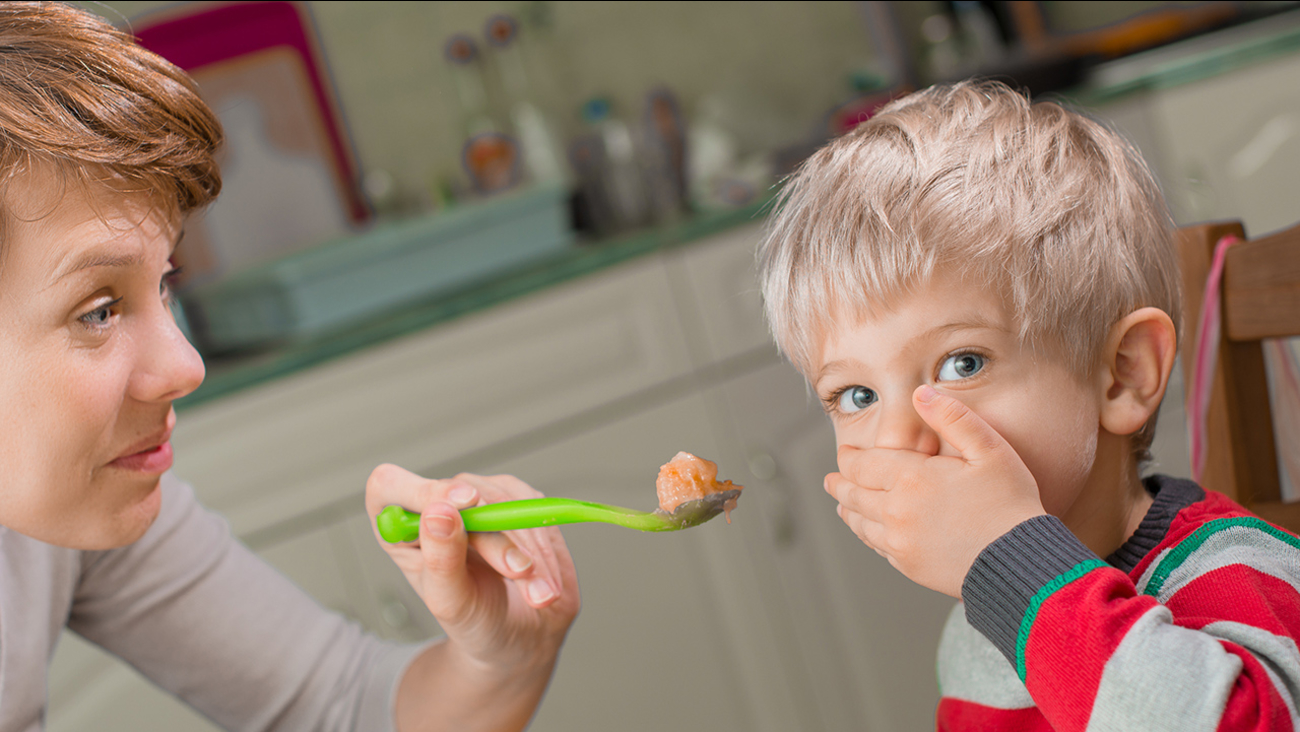 A friend of mine relayed a familiar scene with her four-year-old on Facebook.

Lucy: "I don't like these meatballs." Me, noticing that they are still in big pieces: "Hmm, do you want me to cut them up a little more?" Lucy: "That won't make them yummy."

So goes the battle that in our house, we like to call dinner. But for some parents, it's hardly cause for a new status update. It's more of a tear-your-hair out exercise in frustration. Every day. I have two very young girls of my own and heaven help me, a baby boy on the way this summer. Further flirting with disaster on a nightly basis, I make it a point to cook a fresh dinner and know the feeling that comes when my ta-da! moment is met with one of our two-year-old's negative reviews, "Nooo. I want something else." In those worst case moments, she even pushes the plate away and folds her arms. And, sigh.

Charity is an ABC11 Community Influencer. Read more of her work on her blog .

(Note: While she may ask for "something else" she has exactly one fall-back option: yogurt. This is not a kid who is routinely offered a buffet of more savory choices, yet doesn't hesitate to hold out hope.)

Actually, our kids are okay eaters with their own ups and downs but I wanted to improve our odds overall, so I started asking around. From authors and experts to parents who've been there too, I heard the same thing. Most kids - processed food eating kids, gluten-free kids, chef's kids and everyone in between - are hit or miss eaters, some more, some less. They're not actually trying to drive us crazy though, and parents aren't necessarily to blame.

"Picky eating is a universal problem for parents in the early childhood years," says Elizabeth Pantley, author of The No-Cry Picky Eater Solution. "It's popular to blame picky eating on weak, indulgent parents and stubborn, power-seeking children. But after months of research and interviews with several hundred parents I can confidently say that this theory is totally off the mark. Nearly 85% of parents say that they have a child who is, or has been picky about food. There was no way I would believe that all of those parents are indulgent, and all those children are willful every day, let alone at every meal. Obviously, picky eating is a normal childhood behavior."

How normal? It's everywhere and seems to start young. "For a while it drove me batty that he wouldn't eat," says Amy, mother of 18-month old Lucas in New York City. Her son started getting picky as soon as baby food puree transitioned to more solid food. "It just seems so silly. You're hungry. I have food that I know you like. But honestly I haven't worried too much about his health ever since my pediatrician told me Lucas's diet sounds like her son's."

And Kate, mom to three boys in Ohio, can relate. Her middle son is now eight but also started having trouble at around the same age. "He was a choker. We tried to play hardball with him only once (i.e. you will take a bite of this dinner if you plan to leave the table) and it was a disaster. He threw up the entire meal."

I always knew that eating with kids, even our own kids, was going to be a challenge someday. Now I have a whole website about what works and what doesn't, hoping to inspire a few more parents out there. It's called Foodlets. In my experience, it's all about trying new things, eating healthy food ourselves and never giving up. Even when you crash and burn. Even when you do it often.

"Babies are universally programmed with an innate attraction to sweetness that is most pronounced in infancy and childhood. It progressively lessens during adolescence and into adulthood," explains Pantley. "This isn't to say that adults don't like sweets but their instinctual pull towards these foods is less intense, and is also affected by knowledge and the ability to make proper food choices. Since many healthy foods are in the bitter, sour or savory category it's one reason kids are picky." Basically, it's an uphill battle from the start.

Great food is a priority for our family but I actually try not to stress out eating in general. Sugar isn't forbidden. Chips aren't outlawed, but both are pretty limited in favor of healthier fare. It's still not the end of the world if our toddler won't eat her carrots with citrus butter, though. And if the baby doesn't devour her chicken pot pie, even though it was painstakingly topped with a flower-shaped crust, life goes on. We don't have a clean-your-plate rule but we DO expect everyone to try everything. My goal, dream and semi-deranged ambition is for our kids to grow up loving fresh, delicious, usually healthy, sometimes ethnic food. And I want them to enjoy eating it together as a family. So, fist-pounding is probably out.

What can parents of picky eaters do if they ever want to enjoy a peaceful meal again? "Avoid becoming a short order cook," says Kate. "I reached a point when the boys were six, four and two where I was basically making several different meals. Now I make dinner, certain that there is at least something that our picky one will eat (think fruit). If he chooses not to eat the main course, he gets a bowl of cereal for himself. This makes dinner what it should be about, sitting together and talking and eating. This also removes the power struggle."

Regan, mom of two kids, ages 3 years and 18 months, who also happens to be a graduate of the Culinary Institute of America, is like-minded. "I'm happy to say that I almost never make more than one dinner. Sometimes I'll set aside a little of what I've made before I add a spicy ingredient, or I'll leave something out in part of the dish (olive tapenade off half the pizza, for example) but for the most part everyone is served the same thing."

It's all about keeping your cool but never giving up, say Liz Weiss, MS, RD and Janice Newell Bissex, MS, RD, authors of "No Whine with Dinner" and founders of Meal Makeover Moms. Here's their best advice for encouraging kids to try new foods:


In our house, we also try to create spin-offs based on proven successes. It's the easiest (and usually most successful) way to introduce new foods with less fuss. Our pumpkin muffins (full of veggies, wheat germ and applesauce) were such a hit that I have recreated the recipe in half a dozen different ways, most recently featuring a once-forbidden food: carrots (as in carrot cake muffins with low-sugar cream cheese filling). And I'm not above sneaking healthy ingredients into otherwise decadent dishes. I know they like pasta and cheese, so I tried Melissa Clark's Carroty Macaroni & Cheese and it's a new family favorite. Along these lines, Regan says soup is her secret weapon. "It's the perfect way to get them eating tons of vegetables, and since you can make big batches, it's easy to keep on hand, pack in lunches, etc. And it's a great way to introduce new ingredients-I doubt I could get my son to try a clam, but he loves seafood chowder! And he loves kale soup because it's soup, not because it has kale in it. I think the familiar medium makes them more open to trying new things."

In the end, picky eating is annoying (so is insisting on wearing a tutu to church and flailing on the floor when denied, but I digress...). It's not necessarily unhealthy though, physically or emotionally. I know a lot of readers will respond like with something along the lines of this: "In my day, we ate what we were given!" But let's share a few more present-day options here. What works for you now? Trust me, we're all looking for new ideas every day. They may even end up on Facebook. Especially if they're hilarious.