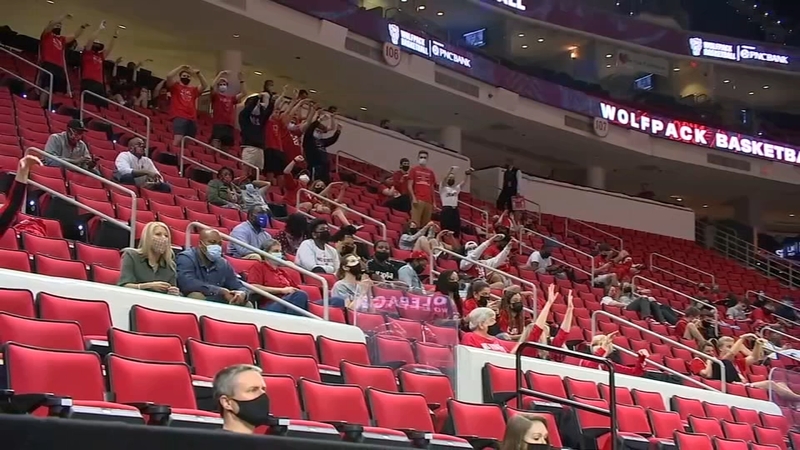 The clapping, shouting, chanting and dancing created the kind of atmosphere NC State students Teresa Sturkey and Julia Kudlick had been craving, but could not experience-until now.

"It was nice. It was good to see everything in person," said Sturkey.

Sunday was the first time since the pandemic that students and Wolfpack fans were back in large numbers at PNC Arena for NC State basketball.

Governor Cooper's latest executive order allows arenas like PNC to operate at 15% of their capacity.

"It's totally different than just having the parents in the stands," said parents Alicia Richmond and Meshia Greene. They have attended every game this season as the proud mothers of Wolfpack players Shakeel Moore and Cam Hayes.

But with fans back in the stands, they say this game felt different.

"It was more excitement. You know a little bit more energy. So it wasn't dead," said Greene.

"You had fans on both sides. It was rows in between each group," said Richmond. "They had the people that work there making sure that people kept their mask on unless they were eating."

The number of fans will continue to increase at the PNC Arena. The university says they anticipate 2,500 people for Saturday's game against Virginia Tech.

Joe Lumbrazo is co-owner of Backyard Bistro, a restaurant near PNC. With the Carolina Hurricanes and NC State playing games later this week, he's anticipating a large crush of sports fans. His restaurant can now open at 50% capacity, serving alcohol until 11 p.m., under Governor Cooper's newest executive order.

The pandemic forced Joe and his co-owners to lay off 200 employees.