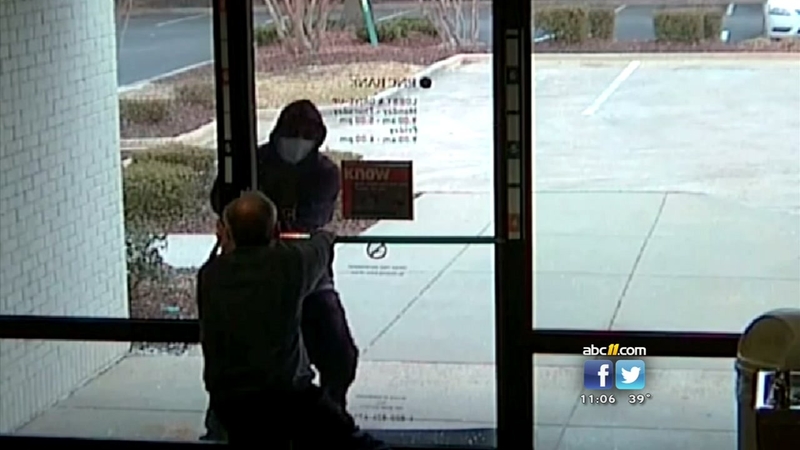 ZEBULON, N.C. (WTVD) -- A manager at the PNC Bank in Zebulon held the bank's door shut when a suspect with a gun tried to enter Thursday.

Zebulon police said they responded to a bank robbery in progress about 9:15 a.m. at the PNC Bank on Arendell Avenue.

According to police, the suspect approached the rear door of the bank wearing a mask, gloves, and hoodie. The bank manager reportedly saw the suspect coming towards the door and physically held the door shut.

The suspect revealed a small, black, semiautomatic handgun, which he used to bang on the door, police said. The manager continued to hold the door shut despite the suspect displaying a weapon and trying to pry the door open.

There was one customer inside the bank. He didn't want to give his name, but he described the situation as "surreal."

The suspect ran from the bank, behind the Rite Aid and toward Gannon Avenue.

After the man fled, police say he went to a possible getaway car parked by Mincey's Shoe Shop on Gannon Avenue.

"He was on the phone. He said 'Ma'am, ma'am, do you know which street this is?' " Hodge said. "He got me shook up, that's all I can say. It surprised me because I never seen the guy before."

"We credit the manager in this situation from not only saving the bank from being robbed, but very likely saving somebody from being injured," said Zebulon Police Chief Timothy Hayworth. "He reacted in a split second, and I think it showed that he was courageous. He was a brave man. I've talked to him since and he says he really doesn't want the publicity for this, but at the same time he's a hero."

Police are hoping to get information from someone who believes that they recognize the suspect in the surveillance photo or who may have witnessed the suspect running in the area or possibly getting into a vehicle.

Police are looking to question the occupant or occupants of a small gray vehicle that was parked behind Mincey's Shoe Shop on Gannon Avenue during the time of the attempted robbery.

Anyone with information should contact The Zebulon Police Department during regular business hours at (919) 823-1818 or 24/7 at East Wake Crimestoppers, (919) 366-CRIM (2746). A reward will be provided for information leading to the arrest of a suspect or suspects in this crime.