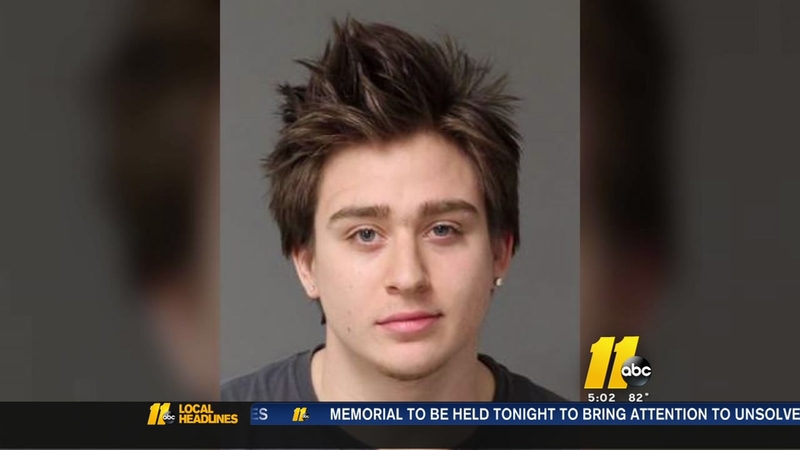 Cary man accused of threatening neighbor with a machete

CARY, NC (WTVD) -- A Cary teenager is charged with threatening to decapitate his neighbor with a machete.

Lollar's neighbor said it all started Monday night when he noticed the holly plant in front of his Sorrell Street townhome had been hacked up.

"The last thing in the world after working 10 hours as a welder you want to come home with a 19-year-old kid wielding a machete," Cameron McMahill told ABC11 by phone from his job site.

McMahill said he soon found out from a neighbor who the culprit was, and he confronted Lollar at an apartment on the backside of McMahill's townhouse.

McMahill wasn't surprised to find out Lollar has been arrested five times and charged with nine crimes in the past two years.

His last arrest before Monday was for violating his probation on convictions of attempted breaking and entering and theft.

"This young gentleman across the street has been a ruckus ever since he's been around. There was a swarm of police cars here yesterday," neighbor Drew Ratliff said.

McMahill says the confrontation moved to the area in front of his townhouse with Lollar still holding the machete.

"He was very specific on what he was going to do with the machete, which was i.e. cut my head off, i.e. chop me up, do all this other insane stuff," he said.

Lollar refused to comment on the case but did say he was moving out.

That was a relief to the victim and other neighbors.
Report a correction or typo
Related topics:
carywake countyarrestmachetewake county newsthreat
Copyright © 2021 WTVD-TV. All Rights Reserved.
TOP STORIES
CDC reverses course on indoor masks in some parts of US
Some Wake parents OK with masks as long as kids can be in class
Mental health experts applaud Biles' tough decision at Tokyo Games
Why this Haitian restaurant relocated from Brooklyn to Edgecombe Co.
LATEST: Cooper to 'review changes to CDC guidance'
800K COVID-19 vaccine doses in NC could expire by end of August
Show More
As COVID-19 cases surge, nervous parents prepare for school year
1 dead in movie theater shooting during showing of 'The Forever Purge'
495 new hepatitis A cases reported in NC this year
4-year-old dies after report of drowning in Harnett County
Mother, boyfriend charged after 5-year-old's death in Aberdeen
More TOP STORIES News