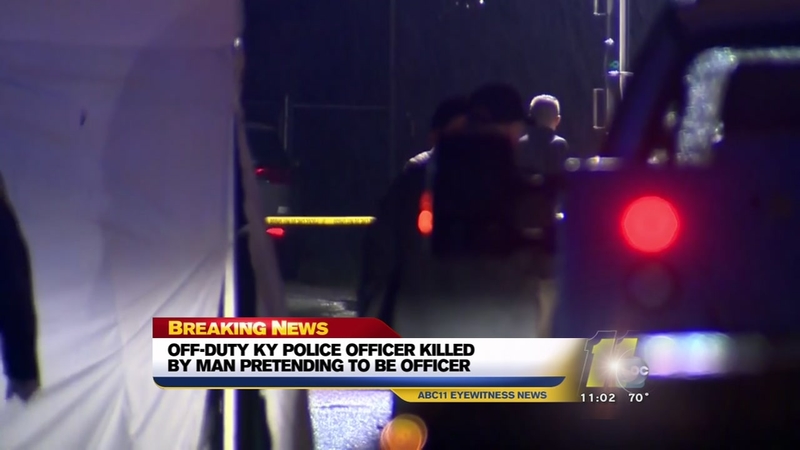 HOPKINSVILLE, Ky. (WTVD) -- Hopkinsville Police said Thursday that an off-duty officer was fatally shot after being stopped by a man pretending to be a law officer. The suspect remains at large.

Kentucky State Police said Thursday night at a news conference that 38-year-old off-duty Hopkinsville officer Phillip Meacham was shot that afternoon and was taken to a hospital, where he died. Meacham was married and had two "school-age" children.

The off-duty officer was in his personal vehicle when he was pulled over by the suspect, who police identified as 35-year-old James Kennith Decoursey.

Police were looking for Decoursey, who they said fled on foot and then stole a 1997 white Chevrolet pickup with license plate 2070GH.

Police said Decoursey should be considered armed and dangerous. They ask that anyone who sees him or that white pickup call 911 immediately.

State Trooper Rob Austin said law officers know Decoursey stole the white truck but it is possible he may no longer be in that vehicle. He would not elaborate on Decoursey possibly impersonating a law officer, citing the sensitive nature of the ongoing investigation.

Sumner said his department is familiar with Decoursey, who has had previous arrests.

In Frankfort, lawmakers in the House stood for a moment of silence after Rep. Walker Wood Thomas of Hopkinsville announced that an officer had been shot.

Hopkinsville is about 73 miles northwest of Nashville, Tennessee.