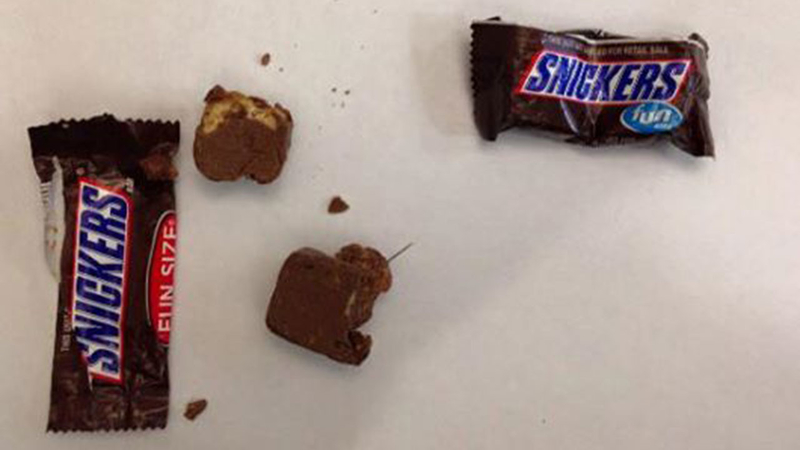 Officers were told Monday night that the needle was found in a Snickers Fun Size candy bar that was received in the Lakeside subdivision area.

On Tuesday, authorities said they found a second piece of candy they believed was suspicious, and may contain a foreign object. They are investigating to confirm it.

The child narrowly missed getting pricked by the needle, and told his parents, who notified police.

"He initially bit into it because the caramel covered the needle," the child's mother, Ada Melendez said. "Fortunately, it didn't prick him, but he was freaking out. So we called the police.

She said she didn't think it was put inside the candy by anyone in the neighborhood.

"We have six kids, and went through all their candy and anything that looked remotely tampered with we threw away," Melendez said. "And the Snickers bars looked fine, they didn't have a hole in the package or anything. So we were really, really shocked."

The Holly Springs police chief says they're searching for the source of the candy.

"It had been opened, but the 9-year-old reported to his parents that he didn't see any tampering with the packaging," Holly Springs Police Chief John Herring said.

Investigators are checking homes where there was candy available on Halloween night.

Parents in Lakeside say they accompany their kids trick-or-treating, so they say they were also shocked to hearing about the investigation in their area.

"I'm in shock," parent Nury Ocampos said. "That's why I moved out of New York, to come to a nice area like Holly Springs, and I can't believe it happened here."

"I've lived here for 10 plus years, so I couldn't imagine it happening," parent Janet Grasso said. "Who would do something like that?"

The police chief said there are similar reports coming from the Charlotte-Mecklenberg area, Roxboro, and other states with the same candy.

"So far we know that it's Snickers, the fun sized Snickers. There were some reports of Twix as well," Chief Herring said.

A mother in Roxboro told ABC11 Monday that her oldest daughter ended up biting into a sharp object tucked away inside a chocolate candy bar.

Police are investigating the incident and are urging parents to be vigilant in checking each piece of candy that children received before they eat it.

Officers recommend breaking open each individual piece of candy so it can be inspected thoroughly. Just checking the outside wrapper may not reveal any signs of any tampering.