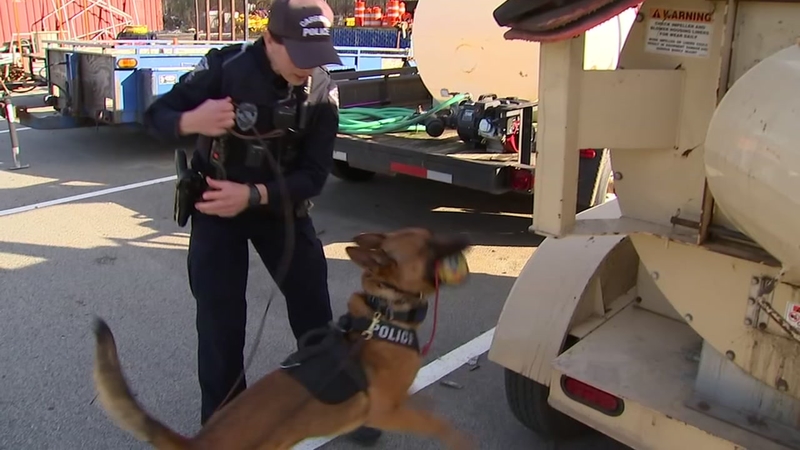 CARRBORO, N.C. (WTVD) -- Not too many police officers start the academy at 42 years old.

Lori McLamb did though.

"A lot of us aren't really put here to do one thing and it's never late to try," she said. "If it works out, great. You gotta give it a go and that's what I did."

This is @CarrboroPD k-9 officer Lori McLamb. That’s her dog blitz. But she’s fairly new to this job. Turns out she went to the academy at 42. #ABC11 pic.twitter.com/Y6lU6vd7Ph

After nearly 20 years in the medical field, she said she joined the police academy in Carrboro after moving with her husband and two kids from Florida to North Carolina.

"I had to scratch the itch. If not I wouldn't have been happy," she said.

McLamb said she thought about it before she turned 30 but she said having two small children made it too difficult. Her inspiration came from an officer she had as a patient in Jacksonville, FL.

"I literally thought the ship had sailed because, in most states, you age out," she said. "But, I found out in North Carolina that if you can pass the requirements of the academy that they'd be more than happy to have you. I was old enough to be many of cadets' mothers."

"The multi-tasking is probably one of the hardest things I've ever done and learning a totally new trade at that age is not easy," McLamb said.

She's now a K-9 officer and said that took years of training to get up to speed.

It's one of the reasons she was also drawn to policing. McLamb worked with dogs for more than 15 years and volunteered for FEMA as a search and rescue handler.

"I was used to talking to people," she said. "It was just a different hat I was literally wearing and a different context. It's challenging. I've always been drawn to difficult things and I like the officers I work with. I like being able to serve my community and I like people. I find them interesting."
Report a correction or typo
Related topics:
societycarrboroemploymentpolice officerjobs
Copyright © 2022 WTVD-TV. All Rights Reserved.
TOP STORIES
RDU adds new airline, another adding several new routes
In video, 'angry' NC Gov. Cooper pushes for stronger gun laws
Timeline breaks down Uvalde shooter's movements day of massacre
TX school shooting leaves at least 19 children, 2 adults dead
Columbine survivor reacts to Texas elementary school shooting.
Person County Habitat for Humanity looking for volunteers
Wake County educator weighs in on gravity of another school shooting
Show More
Should you talk to young kids about mass shootings? And how?
NC schools use tool made after Sandy Hook shooting to protect students
Former Capital Cities/ABC Chairman and CEO Tom Murphy dies at 96
NC Medicaid expansion closer to reality as Senate leader shows support
Wake County moms demand change after Texas elementary school shooting
More TOP STORIES News