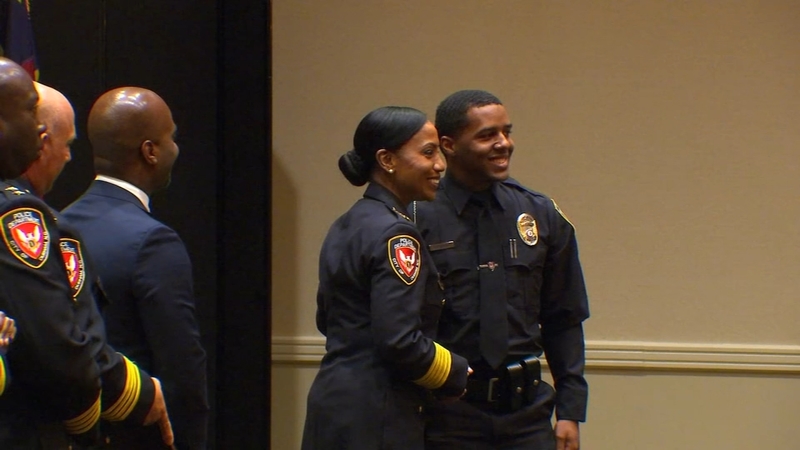 DURHAM, N.C. (WTVD) -- A brand new class of police recruits will hit the streets of Durham tonight just as a new nationwide survey shows a triple threat for police departments -- a decrease in applications, early exits and higher rates of retirement.

Durham's newly-minted officers were sworn in and received their badges at a graduation ceremony for the Durham Police Academy. Nineteen recruits graduated after completing 24 weeks of tactical and classroom training.

The new survey from the Police Executive Research Forum (PERF) shows a nationwide 63% decrease in applying to become a police officer.

“We’re being very intentional about where we are going to recruit. We’re not just waiting for applicants to come to us.” - Chief C.J. Davis
• • •
Durham Police swears in 19 new recruits tonight amid a 63% nationwide decrease in officer applicants. pic.twitter.com/r0LjOgZ6ih

Departments like the Durham Police Department (DPD) are having a much harder time finding non-white applicants, people of color and women. It's had to re-shape its recruiting process.

The survey from PERF also details the struggles' to find new applicants. Many officers are leaving the profession with only one to five years on the job. And more-experienced officers are retiring at a faster rate than ever before.

The survey points to several factors including the added complexities of modem-day policing; like cybercrimes or administering naloxone to an overdose patient. Not to mention the current political climate that some argue is anti-police.

At Durham's graduation ceremony, Enoc Quiroz-Garcia represented the recruits in his speech to the crowd of friends, family, and the public. Quiroz-Garcia served as Class Leader and is one of the department's newest Latino recruits.

"Well it kind of stems from the dedication of duty that comes from the military," Quiroz-Garcia said about why he decided to be a police officer after leaving the Marine Corps. "I just have that dedication to duty and I wanted to continue that. And this seemed like the best place to do it."

Durham Police Chief C.J. Davis is a believer that the department should look like the city it polices.

"We're being very intentional about where we are going to recruit. We're not just waiting for applicants to come to us," Davis said. "We're targeting locations where we can find African-American criminology and sociology majors and public administration majors and Asian applicants and Spanish bi-lingual applicants that will be a good fit."