Politics and Thanksgiving? That's a recipe for disaster 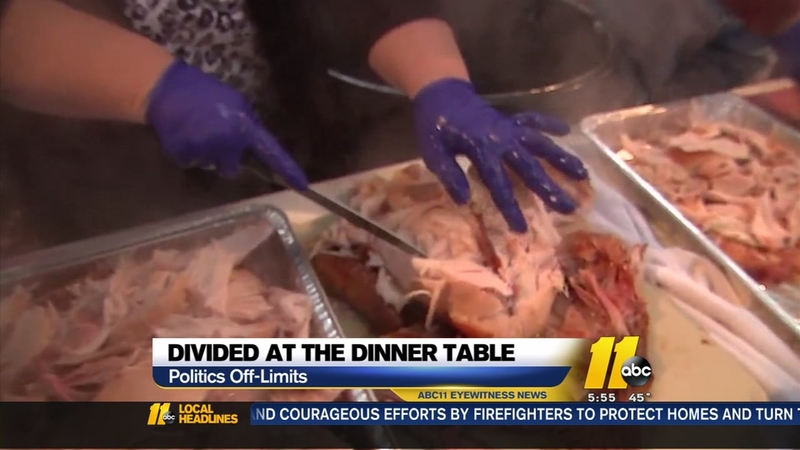 Divided at the dinner table

As if the stress of family at Thanksgiving wasn't enough, sprinkle in some political conversation, and it can be a recipe for dinner disaster.

"Oh yeah, definitely. When you're home with your family for three days, it's going to come up," laughed Elizabeth Vicario.

Anyone out there banning political talk from the dinner table this Thanksgiving? pic.twitter.com/mlE0V9D91i

"My baby brother, he was on there mostly and yes, I told him I was going to pray for him," joked Debrah Obie.

Some are already dreading those divisive conversations.

"I wish politics would be off the table this year, but they probably will not be," said Julianna Gines.

"I think it's definitely going to be a topic for debate. Probably a little more than some of us would like," said Brian Hess.

Others are following suit.

"I don't let my husband talk about it because he can get a little strong I guess you would say," laughed Carol Miles.

"My grandparents will definitely be talking about politics at the table, and we'll just have to smile through it," said Katie Hume.

So what should you do if it does come up?

"Respect other people's views. You can have your own but it doesn't mean you need to be mean to other people," said Hess.

"It's time to be happy. Christmas, Thanksgiving, you know you put all that stuff behind you," said Walter Solomon.