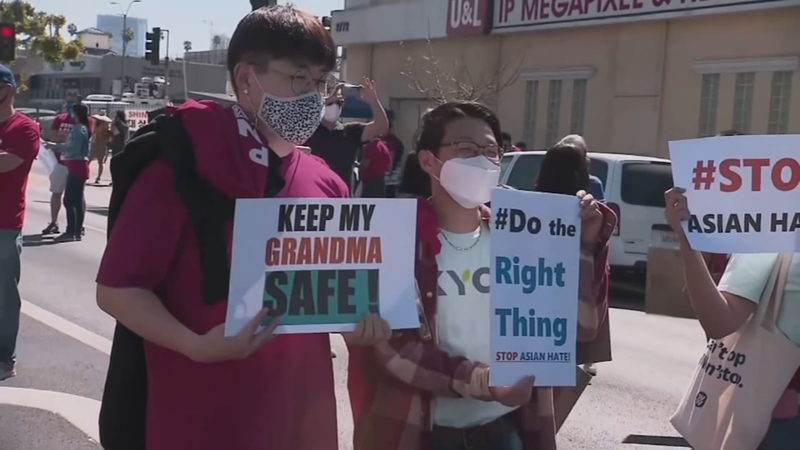 "(It's) encouraging that the issue is being recognized regardless of party lines, I think it's really hopeful in realizing the issue happening to our communities -- the rise, and the existence of anti-Asian hate incidents," said Ricky Leung of the advocacy group North Carolina Asian Americans Together.

Last month, Stop AAPI released a report, stating there were nearly 3,800 reported against people of Asian descent since the beginning of the pandemic; that same day, six women of Asian descent were shot and killed in Georgia.

"It's unfortunate that sometimes we are paying attention to these issues when incidents like the murders in Atlanta, the shootings in Indiana are happening. We know these aren't the only incidents that are happening," Leung said.

The bill will now go to the House where it's expected to pass; President Biden shared a statement about the proposal, writing in part:

"Too often throughout our history, acts of hate and violence directed at Asian Americans have been met with silence. Our nation must stand together to speak out against hate, and declare unequivocally: These acts are wrong. They are un-American. And they must stop."

"I think the recognition of these anti-Asian crimes and harassment that's happening is a great first step," added Leung.

In North Carolina, State Senator Jay Chaudhuri, who represents Wake County, is co-author of The Hate Crimes Prevention Act, which he filed shortly after the shootings in Georgia.

"I have heard from Asian Americans, not only in Wake County but across the state. There continues to be a sense of anxiety and fear given the rise in incidents we've seen against the Asian American community," said Chaudhuri, the Senate Democratic Whip.

While he has not spoken with Republican counterparts about the legislation, he is encouraged by the bipartisan support for federal legislation.

"The bill that I have introduced expands the scope of protection if a hate crime takes place. It includes ethnicity, disability, gender identity, gender expression, and then it also includes additional punishment to the underlying crime that takes place. Similar to the federal legislation, there is a restorative justice element to the bill as well," said Chaudhuri.

"There's no reason we shouldn't try to push for this legislation," Chaudhuri said.

As North Carolina mayors, the recent murderous attack against Asian-American women in Atlanta and New York compels us to speak out.

To the world we say that all people are welcome in our cities and towns. In the context of the Atlanta murders, we especially want the world to know that we fully embrace the members of our Asian communities as friends, co-workers and neighbors.

To the members of our Asian communities, we want you to know that we will stand with you against discrimination and violence, that you can count on us to speak up in your defense and do everything within our power to protect you against violent or discriminatory attacks.

You are valued members of our community, and we welcome you with open arms and open hearts. To Asian-American women, especially, we want you to know that we see the double burden of racism and misogyny that you must often face-the lethal combination of forces that led to the murders in Atlanta-and that we will stand with you whenever, wherever to combat these forces.

To our fellow North Carolinians, we ask that you join us in supporting our Asian brothers and sisters. As Dr. King wrote, "We are caught in an inescapable network of mutuality, tied in a single garment of destiny. Whatever affects one directly, affects all indirectly." The discrimination and violence which harm Asian-Americans harm all of us, for we are a single, united community beating with one heart.

It was signed by: