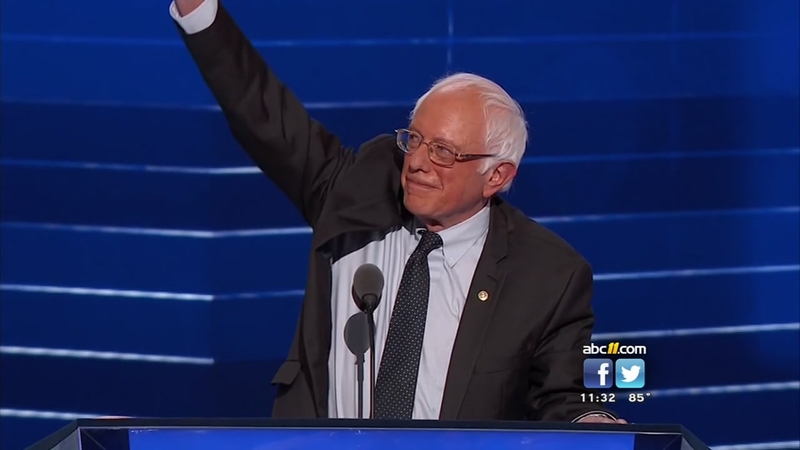 PHILADELPHIA -- Ending months of animosity, Bernie Sanders robustly embraced his former rival Hillary Clinton Monday night as a champion for the same economic causes that enlivened his supporters, signaling it was time for them, too, to rally behind the Democratic nominee in the campaign against Republican Donald Trump.

"Any objective observer will conclude that - based on her ideas and her leadership - Hillary Clinton must become the next president of the United States," he declared in a headlining address on the opening night of the Democratic convention.

President Bill Clinton, watching from the audience, leapt to his feet and applauded, as did most of the delegates filling the convention arena.

Sanders joined a high-wattage line-up of speakers, including first lady Michelle Obama who delivered a forceful, impassioned defense of the Democratic nominee. Mrs. Obama's address all but wiped away earlier tumult in the convention hall that had exposed lingering tensions between Clinton and Sanders supporters. 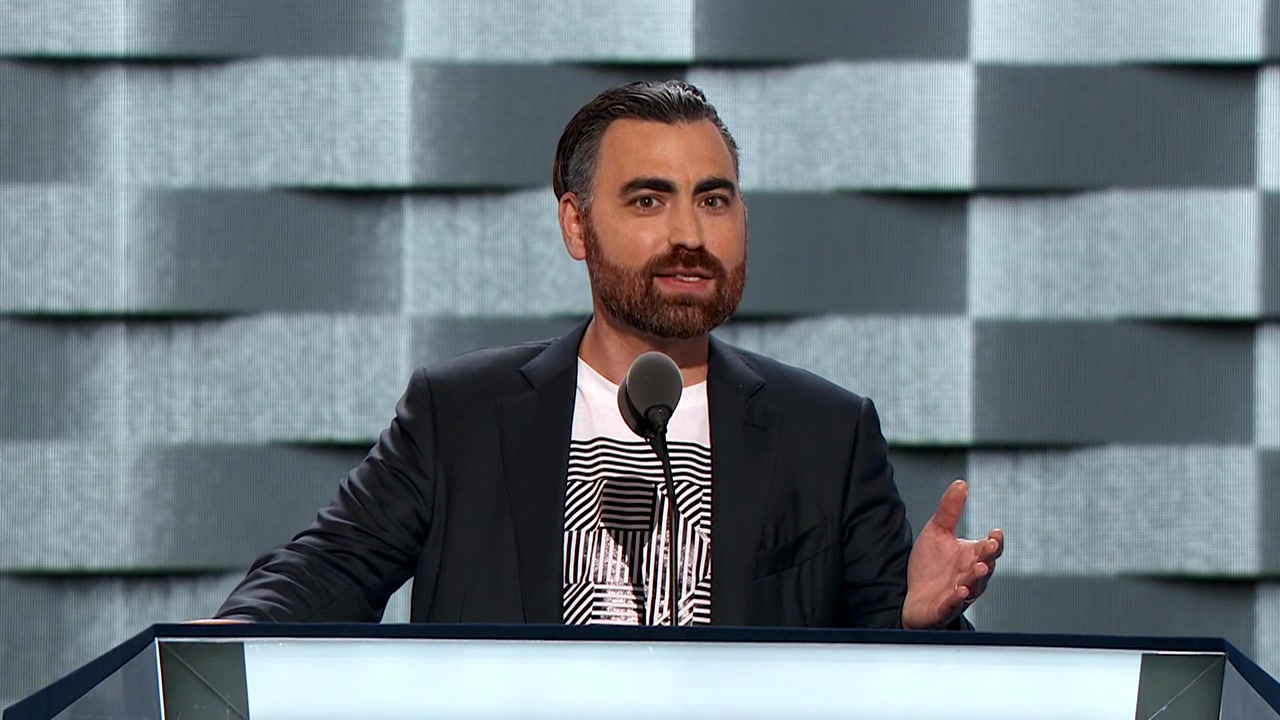 "I want someone with the proven strength to persevere, someone who knows this job and takes it seriously, someone who understands the issues a president faces are not black and white," Mrs. Obama said. Referring to Trump's penchant for tweeting, she said of the presidency: "It cannot be boiled down to 140 characters."

While Sanders had endorsed Clinton previously, his remarks Monday marked his most vigorous and detailed praise of her qualifications for the presidency. It came at a crucial moment for Clinton's campaign, on the heels of leaked emails suggesting the party had favored the former secretary of state through the primaries despite a vow of neutrality.

Sanders scored the resignation of party chair Debbie Wasserman Schultz, a nemesis in the primaries, but that wasn't enough to quell the anger of supporters. As the convention opened, they still erupted in chants of "Bernie" and booed Clinton the first several times her name was mentioned. Outside the convention hall, several hundred marched down Philadelphia's sweltering streets with signs carrying messages such as "Never Hillary."

By the time Sanders took the stage for the night's closing address, much of the anger had been overshadowed by speeches promoting party unity. Sanders did his part, imploring his supporters to consider a country under Trump's leadership.

"If you don't believe this election is important, if you think you can sit it out, take a moment to think about the Supreme Court justices that Donald Trump would nominate and what that would mean to civil liberties, equal rights and the future of our country," he said.

Sanders spoke just after Massachusetts. Sen. Elizabeth Warren, a favorite of liberals who has emerged as one of the Democrats' toughest critics of Trump.

"Donald Trump has no real plans for jobs, for college kids, for seniors," she said in the keynote address. "No plans to make anything great for anyone except rich guys like Donald Trump."

Mrs. Obama was one of the night's standouts. While she has often avoided overt politics during her nearly eight years in the White House, her frustration with Trump's rise was evident. She warned that the White House couldn't be in the hands of someone with "a thin skin or a tendency to lash out" or someone who tells voters the country can be great again.

"This right now, is the greatest country on earth," she said.

Clinton's campaign hoped the nighttime line-up would overshadow a tumultuous start to the four-day convention. The hacked DNC emails fed the suspicion of Sanders' supporters and sapped Clinton's campaign of some of its energy following a well-received rollout Saturday of her running mate, Virginia Sen. Tim Kaine.

Campaigning in North Carolina, Trump seemed to revel in the Democrats' commotion, telling supporters that Clinton made a mistake by not choosing a more liberal running mate to appease Sanders' base. "Crazy Bernie's going crazy right now," he said. 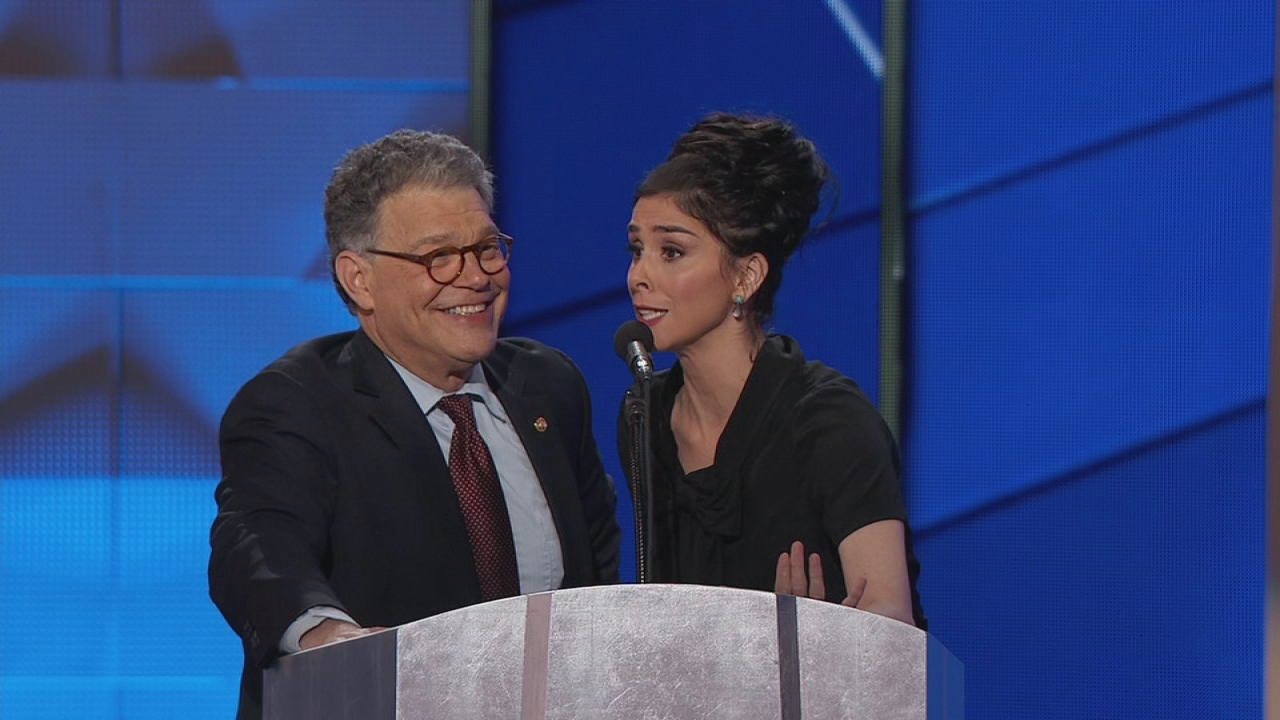 Sarah Silverman talks to Bernie fans
"To the 'Bernie or Bust' people; you're being ridiculous," the comedian told the crowd at the Democratic National Convention Monday night.

"I am proud to be part of Bernie's movement," Silverman said as the crowd roared. "And a vital part of that movement is making absolutely sure Hillary Clinton is our next president of the United States."

Trump was a frequent target throughout the night, though the jabs were often more mocking than mean. The tone was a sharp contrast to the Republican convention, where the attacks against Clinton was bitingly personal, including chants of "Lock her up."

Wasserman Schultz had planned to be among those taking the stage, despite the email hacking controversy. But she stepped aside, bowing to pressure from Democrats who feared the mere sight of her on stage would prompt strong opposition.

The outgoing chairwoman did watch the gathering from a private suite at the arena.

Discussions between the Clinton and Sanders camps prompted him to send emails and text messages to supporters asking them not to protest.

"Our credibility as a movement will be damaged by booing, turning of backs, walking out or other similar displays," Sanders wrote.