WTVD
By Joel Brown
WINSTON-SALEM, N.C. (WTVD) -- The North Carolina voting rights case got underway Monday inside the federal courthouse in Winston-Salem with implications that will likely be felt throughout the American South.

With the stakes as high as they are, both sides of the controversial debate showed up in Winston-Salem geared for a fight.

Over 1,000 protesters marched on downtown Winston-Salem. They rallied blocks away from the courthouse after day one of the trial.

It's the state NAACP and the U.S. Department of Justice versus Gov. Pat McCrory in a lawsuit to overturn the state's restrictive new voting laws passed by GOP lawmakers in Raleigh two years ago.

The face of "Moral Monday," Rev. William Barber was the first to take the stand. He testified that the new voting rules are not only discriminatory, but, were devised to suppress black and Latino voting.

"Thank God for people that still believe in freedom," Barber exclaimed in an interview Monday afternoon.

"David goes up against a giant. We are going up against a giant," said Rev. Todd Fulton with the North Carolina Minister's Council. He likened the NAACP's lawsuit against the state to the Biblical battle of David and Goliath.

Proving Republican "intent" to discriminate will be a tall order in court.

"[The plaintiffs] are trying to undo the voter protections and the voter ID law that ensure our elections are fair," said N.C. GOP Spokesperson Ricky Diaz.

The debate outside the courthouse got personal, when Republicans charged Barber's protests are not driven by morality, but by payouts from labor unions.

Barber called the charges a deflection.

"They always try to change the conversation, but it won't work," said Barber. "That's why we took it to court, because in court, they can't bring in all that propaganda."

The trial is expected to last two to three weeks. And other states, like Texas especially, which also recently revamped its voting rules, is watching the case intensely.

The decision in Winston-Salem will help define what's legal and what's not in newly enacted voting laws across the country. 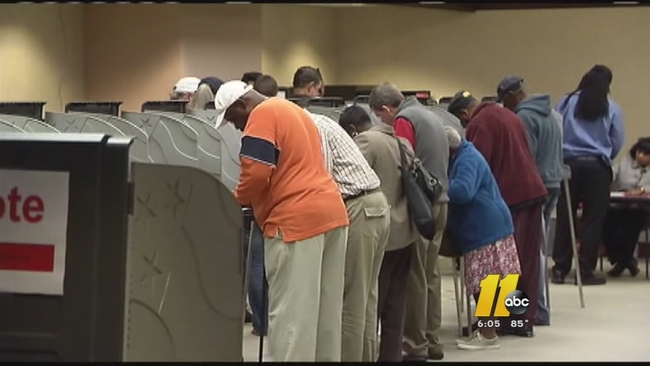