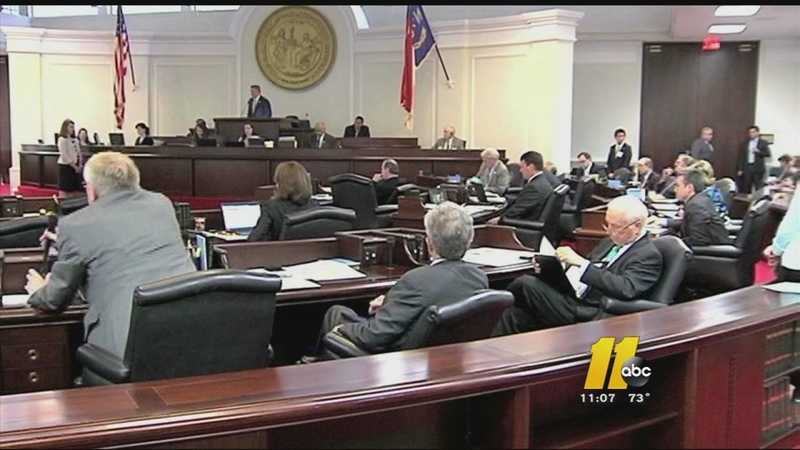 But it won't be enough to avoid another temporary spending extension, with the next one stretching into mid-September. The two-year budget was supposed to be finished by July 1.

House and Senate Republican leaders confirmed spending targets in broad government agency categories have been finalized, such as for public education, health and human services and public safety. There's also still about $120 million unspoken for so the top negotiations can work out any nagging differences, according to the proposal. But the targets, reached Tuesday, opened the door for chairs of subcommittees to begin meeting in earnest.

The two chambers already had agreed last week that overall spending would be $21.74 billion this year.

"A lot of progress has been made in the last 72 hours," House Speaker Tim Moore, R-Cleveland, told colleagues on the House floor. "The good news is it looks like we're getting close."

The deal would give all state workers and teachers a $750 bonus around Christmas, and teachers also would receive their experience-based salary increases, according to another document outlining the agreement obtained by The Associated Press.

"The salary piece has all been worked out," Brown said.

McGrady cautioned this and other agreements are "in pencil" essentially until the chambers formally vote on a final budget. But the new agreements appeared intact after House and Senate Republican caucuses met privately Wednesday afternoon.

"Everything is tied to everything else," McGrady said, but "that is the right number right now."

The deal also would set aside $30 million over two years to raise salaries in the community college system, and $37.5 million over the same period would go into a "salary adjustment fund" sought by Gov. Pat McCrory to raise salaries in hard-to-staff or high-demand positions, according to the agreement. State troopers and correctional officers also would see salary help.

Previous temporary spending agreements approved earlier this summer already had raised minimum salaries for early-career teachers from $33,000 to $35,000. That stays in place, but the actual base salaries for the other five experience-based levels would not change, the document says.

The House budget approved in May had proposed a 2 percent across-the-board raise for state employees and most teachers, but such an increase looked unlikely as the two chambers and McCrory agreed last week on spending $420 million less this year compared to the House budget. The Senate's budget and McCrory's proposal pushed the salary adjustment fund idea.

North Carolina Association of Educators President Rodney Ellis said the one-time bonus for most teachers shows the General Assembly "has no long range plan to address the impending teacher shortage crisis and the ability to recruit and retain quality educators" to classrooms.

"Once again it's another slap in the face," said veteran WCPSS teacher Dianne Jones. "I just don't understand why these legislators don't think we're that important that they can't raise our pay to at least the national level."

"It's demoralizing. We work so many hours, and to not be able to meet basic needs with our pay is just ridiculous," said WCPSS instructional coach Stacy Eleczko.

No decision has been made on whether state retirees will receive a cost-of-living increase this year, Brown said.

Despite a $445 million surplus from last year, budget negotiations have been hampered since late June by large policy differences and the inability of both sides to agree on a bottom-line spending number. The logjam eased slowly as Senate Republicans agreed in early August to separate a Medicaid overhaul proposal and economic incentives from the budget process.

The first temporary spending plan to keep government operating during the delays was to expire Aug. 14. A second similar "continuing resolution" is set to expire Monday. Brown and Moore said a third such a resolution would be voted on Thursday and expire Sept. 18. McCrory, a Republican, would be asked to sign the third extension and any final budget into law.