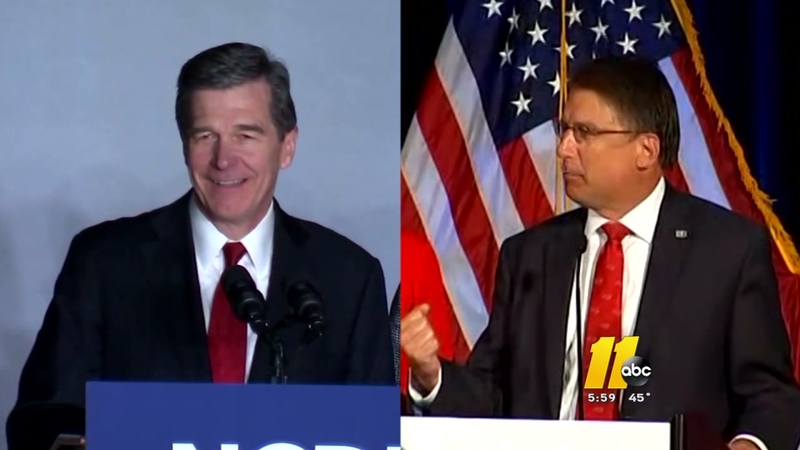 RALEIGH -- Democrat Roy Cooper announced members of his transition team for North Carolina governor Monday despite close election results that are being disputed by his Republican opponent, Gov. Pat McCrory.

Related story: How close are we to deciding North Carolina's governor?

In a video released on social media Sunday night, Cooper said again that he has won the race for governor. He said that McCrory's team is using "misleading and dishonest rhetoric" to undermine the results of the election.

"There's a process that's set in place to deal with the closest election that we've ever had in North Carolina history, and we got to respect that process on all sides and allow that process to work out," said McCrory on Monday. "And that's exactly what I'm going to do while also dealing with hurricane and floods and wildfires."

The State Board of Elections shows Cooper with 6,600 vote lead. Most counties in North Carolina have not finished their official tally due to a number of election challenges. As of Monday afternoon, only 12 counties have certified their election results.

McCrory's campaign had asked the State Board of Elections to take over jurisdiction in those counties, but the board declined in almost all requests on Sunday. Most current protests allege votes shouldn't be counted because the voter died before Election Day, is a convicted felon or voted in multiple locations.

"To file more than 50 electoral complaints in more than 50 counties across the state without any factual basis whatsoever is reckless," said Rep. GK Butterfield at a press conference. "If we were in a court of law filing these types of frivolous and reckless claims, he would be held in contempt of court and he would be held financial accountable for his misconduct."

The State Board of Elections will hold a public meeting Tuesday at 10 a.m. to provide legal guidance to county boards.
Cooper named Kristi Jones and Jim Phillips as transition co-chairs. Ken Eudy was named execute director of the transition. Jones is Cooper's long-time chief of staff while Phillips is a lawyer in Greensboro. Eudy is the co-founder of Capstrat in Raleigh.

Cooper launched a transition website with a message of, "We're hiring." People can submit applications online.

Get the latest political news on the ABC11 News app