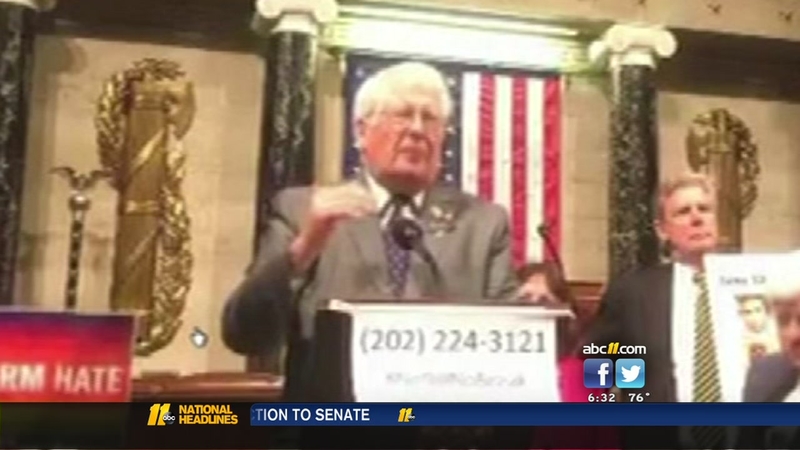 WASHINGTON -- Weary but jubilant House Democrats ended their extraordinary sit-in on the chamber's floor Thursday more than 24 hours after it began, a protest that let them broadcast their demands around the world for gun-control votes in the wake of the mass shooting at a Florida nightclub.

There were no indications that Republicans who run the House had granted Democrats' insistence for votes on bills strengthening background checks and barring firearms sales to people on the government's no-fly list.

Even so, 25 hours after they commandeered the chamber and blasted images of themselves on social media, Democrats filed out and declared victory.

"We are going to win this struggle," said Rep. John Lewis, D-Ga., the civil rights icon who helped lead the sit-in.

Hours earlier, Republicans had exited the Capitol, branding the remarkable sit-in a publicity stunt and summarily adjourning the chamber at about 3:15 a.m. EDT until after the Fourth of July.

"We are not going to allow stunts like this to stop us from carrying out the people's business," Speaker Paul Ryan, R-Wis., said Thursday morning in dismissing the protest. Ryan held up copies of Democratic fundraising appeals based on the protest.

One by one, Democrats delivered speeches that mixed victory declarations with promises not to back down in their drive to curb firearm violence. Placards with photos of gun victims and the phone number of the Capitol switchboard were prominently displayed on the floor.

"It's rightful indignation," Rep. Paul Tonko, D-N.Y., said about the Democratic sit-in and the positive reaction it was getting from supporters. "America has had enough."

When Republicans streamed to the exits hours earlier, Democrats stayed behind on the House floor, shouting "No bill, no break!" and waving papers with the names of gun victims written in black.

With a crowd cheering them on from outside the Capitol and many more following the theatrics on social media, Democrats declared success in dramatizing the argument for action to stem gun violence.

"Just because they cut and run in the dark of night, just because they have left doesn't mean we are taking no for an answer," said Democratic leader Nancy Pelosi, D-Calif.

Republicans fiercely resisted the pressure and said Democrats had accomplished nothing other than disrupting the business of the House to score political points. House Speaker Paul Ryan, R-Wis., called it "a publicity stunt."

Rep. John Lewis, D-Ga., who had participated in the civil rights sit-ins in the South in the 1960s, said Democrats had "crossed one bridge." He added, "We have other bridges to cross," and said Democrats "made a down payment on ending gun violence" in America.

At one point overnight, the two sides nearly came to blows after Rep. Louie Gohmert, R-Texas, approached the Democrats and yelled, "Radical Islam!" Rep. Corrine Brown, D-Fla., started yelling back. The two came within inches of each other, both screaming, only to be separated by colleagues.

Pressure had built on Capitol Hill following the shootings at a gay nightclub in Orlando this month that killed 49 people and injured 53 others. The assailant also died. The mass attack followed similar tragic incidents over the past years including the elementary school shooting in Newtown, Connecticut.

The agitation for action caused a Senate filibuster last week and led to the chaos in the House, a spectacle that captured the attention of a Washington gridlocked on guns.

House Republicans used their prerogatives as the majority party to muscle through, with no time for debate, a partisan bill that provides money for the Zika crisis. GOP lawmakers overruled Democrats' objections and then acted to adjourn the House into next month. Democrats cried "Shame, Shame!"

Republicans shut off the cameras in the House gallery throughout most of the protest, but Democrats used their cellphones to capture the action. C-SPAN carried the feeds live via Periscope and Facebook, in an unprecedented move.

Ryan said the gun bills pushed by Democrats, to expand background checks and keep people on the no-fly list from getting guns, would take away people's constitutional rights and deprive them of due process. He noted that the Senate this week rejected similar legislation.

The protest began around 11:30 a.m. Wednesday, unfolding on the House floor with little advance warning from the Democrats. Most of the 188 Democrats took turns speaking, joined by dozens of Senate Democrats.

Scattered around the House floor were signs reading "Disarm Hate."

The sit-in, with Lewis playing a leading role, had the look of a 1960s-style protest. Some lawmakers sat on the floor; others were in their seats.

Republicans staged a similar protest in 2008. Democrats controlling the House at the time turned off the cameras amid a GOP push for a vote to expand oil and gas drilling. Republicans occupied the floor, delivering speech after speech after Pelosi, then the House speaker, sent lawmakers bolting to their August recess. Pelosi at that time had ordered the cameras turned off.

C-SPAN, a cable and satellite network that provides continual coverage of House and Senate floor proceedings, does not control the cameras. They are run on authorization by legislative leaders.