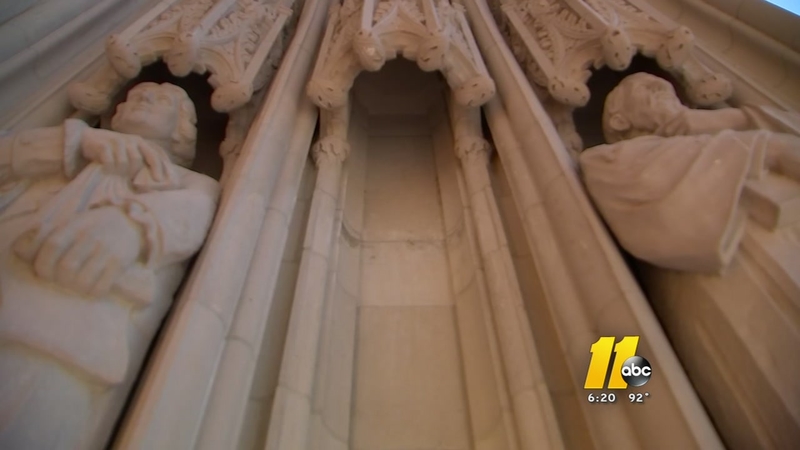 Durham, North Carolina (WTVD) -- Visitors seeing Duke Chapel for the first time often comment on its size and scope as they approach the iconic house of worship.

But those who go there regularly may notice something missing as they enter the chapel - Robert E. Lee's statue.

That space is vacant now, after an order from Duke President Vincent E. Price to remove the stone-carved representation of the Confederate Army general. The university quietly removed the statue, then notified the media early Saturday.

Duke leaders say the decision to remove the statue came after they saw the emotional reactions across the nation to criticism of Confederate statues and the battle flag displayed in public spaces.

"You open up a question about history and memory," said Duke's vice president for public affairs Michael Schoenfeld." That is clearly a debate that is raging now across the country, and Duke is not immune to it."

Schoenfeld said the decision by Duke President Vincent E. Price came after a period of contemplation.

"President Price consulted extensively with students, with faculty, with staff, with alumni. He heard from many, many people," said Schoenfeld. "The statue was vandalized on Wednesday night. This is a house of worship. There are many people coming through here every day, and we did have legitimate concerns about safety and security."

"That's a good step," said North Carolina NAACP president the Rev. William Barber. "I heard one of the reasons he wanted it removed was so somebody wouldn't hurt the chapel. I wish that hadn't been said." Instead, he's calling on leaders to consider the effects of racism on all Americans.

Barber also mentioned what critics consider the polarizing nature of a Confederate statue still standing in 2017. He praised the efforts by the ethnically diverse protesters who took action against Confederate icons like the one toppled in Durham last week.

"We can't allow the white supremacists to say 'white supremacy' like they represent all white people." said Barber, standing with a diverse group of people who support calls for the removal of Confederate statues.

Now, Luke Powery, dean of Duke Chapel, wants concerned people to discuss "what Lee and others may represent historically. But it's tricky because here at Duke in particular, the history isn't clear in terms of why these particular Southern figures" are represented with statues or other tributes.

A letter written by Price to the Duke community says he's "creating a commission, to include faculty, students, staff, alumni, trustees and members of the Durham community, to advise on next steps and assist us in navigating the role of memory and history at Duke."

"After hearing from and consulting with a number of students, faculty, staff, and alumni, and with the strong support of the Board of Trustees, I authorized the removal of the statue of Robert E. Lee from the entrance of Duke Chapel early this morning.

I took this course of action to protect Duke Chapel, to ensure the vital safety of students and community members who worship there, and above all to express the deep and abiding values of our university.

The removal also presents an opportunity for us to learn and heal. The statue will be preserved so that students can study Duke's complex past and take part in a more inclusive future.

Wednesday night's act of vandalism made clear that the turmoil and turbulence of recent months do not stop at Duke's gates. We have a responsibility to come together as a community to determine how we can respond to this unrest in a way that demonstrates our firm commitment to justice, not discrimination; to civil protest, not violence; to authentic dialogue, not rhetoric; and to empathy, not hatred.

As part of this effort, I am creating a commission, to include faculty, students, staff, alumni, trustees and members of the Durham community, to advise on next steps and to assist us in navigating the role of memory and history at Duke. The commission will look at how we memorialize individuals on the Duke campus in buildings and sculpture and recommend principles drawn from Duke's core values to guide us when questions arise. I will ask this commission to work expeditiously.
In addition, and in concert with Provost Sally Kornbluth, we will use the next year to explore various aspects of Duke's history and ambitions through teaching and scholarship. This will include an exhibition in the Library; a campus conversation about controversy and injustice in Duke's history; and a forum to explore academic freedom, freedom of speech, and freedom of assembly in the university. Further information about these programs will be forthcoming.

As this process moves forward, I welcome your thoughts about how Duke can best address the troubling events of the past few months, learn from a careful and unvarnished understanding of our national and institutional history, and build a stronger, more inclusive future as a university community."