"We can only conclude that the North Carolina General Assembly enacted the challenged provisions of the law with discriminatory intent," Judge Diana Gribbon Motz wrote for the majority.

The law's most public feature is that it requires voters who appear in person to cast ballots to show an accepted form of photo identification like a driver's license, a passport or a military ID. The law also eliminated same-day voter registration and ended out-of-precinct voting. The number of early-voting days was cut while the early-voting hours available stayed stable.

The U.S. Justice Department, the North Carolina NAACP chapter, and named voters sued after the law was passed alleging it discriminates against poor and minority voters in violation of the Constitution and U.S. Voting Rights Act.

U.S. District Judge Thomas Schroeder upheld the law in April, but his ruling was appealed.

After Friday's ruling, the ACLU of North Carolina called it a "sweeping victory for voting rights."

"With surgical precision, North Carolina tried to eliminate voting practices disproportionately used by African-Americans. This ruling is a stinging rebuke of the state's attempt to undermine African-American voter participation, which had surged over the last decade," said Dale Ho, director of the ACLU's Voting Rights Project. "It is a major victory for North Carolina voters and for voting rights."

Gov. Pat McCrory, who supports the law, promised to appeal.

"Photo IDs are required to purchase sudafed, cash a check, board an airplane or enter a federal court room. Yet, three Democratic judges are undermining the integrity of our elections while also maligning our state. We will immediately appeal and also review other potential options," he said.

You needed a photo ID to be a delegate at the DNC Convention. Hypocrites! https://t.co/wy79vZGG6s #NCVoterID #ncpol

"Today, the federal court has validated my long held view that this law discriminates against African American voters because of their race," Butterfield said in a statement. "It is my hope that the State of North Carolina will embrace this decision instead of pursuing costly appeals."

"Since today's decision by three partisan Democrats ignores legal precedent, ignores the fact that other federal courts have used North Carolina's law as a model, and ignores the fact that a majority of other states have similar protections in place, we can only wonder if the intent is to reopen the door for voter fraud, potentially allowing fellow Democrat politicians like Hillary Clinton and Roy Cooper to steal the election. We will obviously be appealing this politically-motivated decision to the Supreme Court."

"The North Carolina Democratic Party applauds this decision to restore voting rights to disenfranchised North Carolina voters. It's no surprise the court has ruled that the Republican General Assembly is once again guilty of government overreach. Governor McCrory and the GOP want to restrict ballot access because they know they can't win on their record of public education funding cuts and hurting our state's economy by passing their discrimination law, HB2. We look forward to the chance to elect new leadership in November to put North Carolina back on track," said NCDP Chair Patsy Keever.

The Rev. Dr. William Barber, president of the NC NAACP said, "We as you might imagine are beyond happy today that the 4th Circuit Court of Appeals decision exposed for the world to see under the light of our constitution the racist intent of extremist elements in North Carolina."

State Board of Elections Executive Director Kim Westbrook Strach said because of Friday's ruling, North Carolina voters will not have to show ID this fall's election.

"Absent alternative guidance from the courts, voters will not be asked to show photo identification this election. Early voting will run October 20 through November 5, and same-day registration will be available at early voting sites," she said. "Counsel for the state are reviewing options on appeal. Regardless of the outcome, our agency will continue to educate voters and prepare elections officials ahead of November." 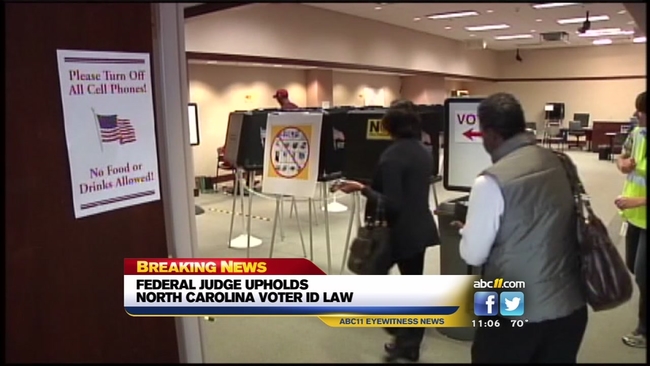