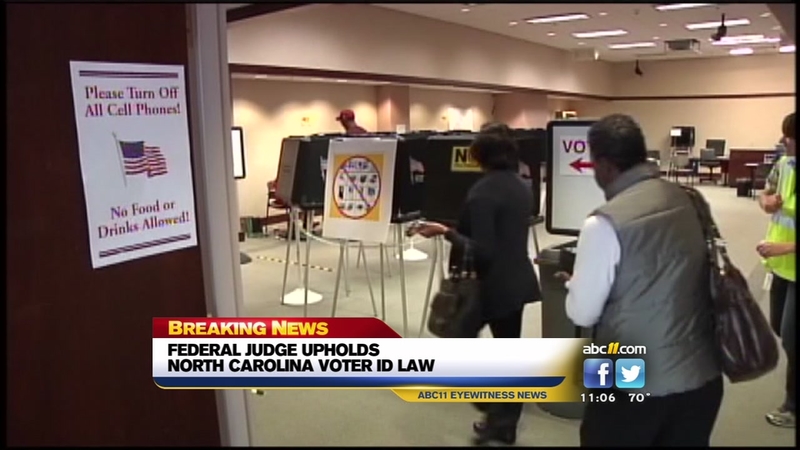 U.S. District Judge Thomas Schroeder ruled against the U.S. Justice Department, the North Carolina NAACP chapter and named voters. They sued alleging the law was passed to discriminate against poor and minority voters in violation of the Constitution and U.S. Voting Rights Act.

While North Carolina had a sordid history of freezing black voters out of the political process, the plaintiffs didn't show that the law hampered the ability of minority voters to exercise electoral politics, Schroeder said.

The plaintiffs "failed to show that such disparities will have materially adverse effects on the ability of minority voters to cast a ballot and effectively exercise the electoral franchise" as a result of the 2013 state law, Schroeder wrote. That argument was made more difficult after black voter turnout increased in 2014, he wrote.

"There is significant, shameful past discrimination. In North Carolina's recent history, however, certainly for the last quarter century, there is little official discrimination to consider," Schroeder wrote.

The law's most public feature is that it requires voters who appear in person to cast ballots to show an accepted form of photo identification like a driver's license, a passport or a military ID. The law also eliminated same-day voter registration and ended out-of-precinct voting. The number of early-voting days was cut while the early-voting hours available stayed stable.

"This ruling is a decisive victory for North Carolina over George Soros, Hillary Clinton and the Roy Cooper-backed out-of-state special interests who tried to overturn the state's common sense voter ID law, in order to make it easier to cheat in our elections," said NCGOP executive director Dallas Woodhouse. "Despite the scare tactics, misinformation and constant attacks from the radical left, the court threw out their false arguments and ruled that this common sense law is constitutional."

Much of the discussion during the trial focused on whether voter fraud exists in North Carolina. That was one of the arguments lawmakers used in including the photo ID requirement, which took effect during last month's primary elections.

Advocates who filed the lawsuits condemned the decision.

"This is just one step in a legal battle that is going to continue in the courts," said Penda Hair, an attorney representing the NAACP. The law "targets the provisions that once made North Carolina among the states with the highest turnout in the nation. This progress was especially clear among African-American and Latino voters, who came to rely on measures like early voting, same-day registration and out-of-precinct provisional ballots to ensure their voices were heard.

Gov. Pat McCrory, a Republican seeking re-election this year, focused on the voter ID provision of the law in praising the ruling. McCrory was a defendant in one of the lawsuits.

"This ruling further affirms that requiring a photo ID in order to vote is not only common-sense, it's constitutional," Gov. Pat McCrory said in a statement. "Common practices like boarding an airplane and purchasing Sudafed require photo ID and thankfully a federal court has ensured our citizens will have the same protection for their basic right to vote."