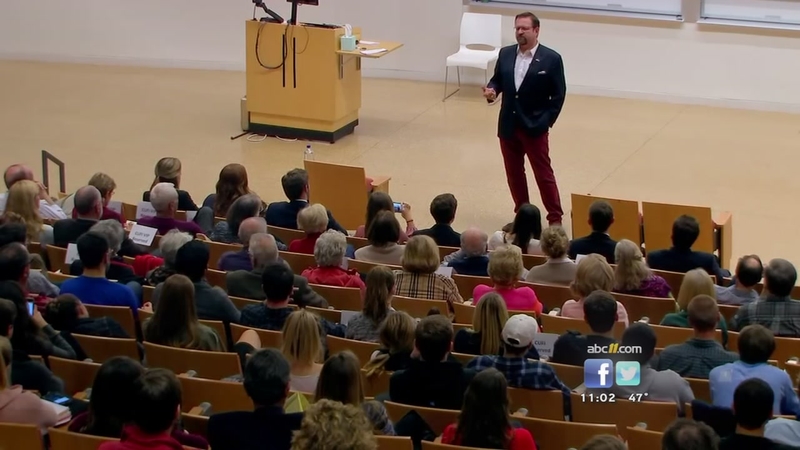 CHAPEL HILL, North Carolina (WTVD) -- With a sizable contingent of officers, UNC-Chapel Hill Police kept a close watch on the events inside and outside the Genome Sciences Building auditorium while Sebastian Gorka, one of the most controversial speakers to visit campus in some time, delivered his 90-minute address.

The protesters who call themselves part of the "Trump resistance" chanted and yelled so loudly that at times, they could be heard inside the hall.

"No Gorka, no KKK, no fascist USA," they chanted from the sidewalk of Bell Tower Drive.

Inside, Gorka regaled UNC with stories of his political rise within the sphere of Donald Trump; a trusted campaign advisor who went on to become Deputy Advisor to the President.

President @realDonaldTrump’s controversial former advisor Sebastian Gorka delivering speech at UNC. You can hear outside protestors intermittently from inside the auditorium. #abc11 pic.twitter.com/85SRsxzgXp

Some of President Trump's supporters stood outside the auditorium donning red Make America Great caps while anti-Trump demonstrators labeled Gorka as a racist, fascist and an Islamophobe.

"Sebastian Gorka is best known for his inflammatory statements about Muslims. He said the biggest problem the country has is black-African on black-African crime," said Bo Eberle, a UNC graduate student in religious studies.

"They're victims of fake news. They should read my book, read what I said," Gorka said.

Gorka was invited by the UNC College Republicans to address U.S.-Israeli relations in the age of Trump, which touched off loud arguments outside about the road to Middle East peace.

"Hearing something else besides the liberal ideology is always good, said Josh Jackson, a UNC junior who attended and said he enjoyed Gorka's visit. "(Liberal ideology is) shoved down our throats in our classes."

"They shouldn't misquote me, that's what I would say," Gorka said of the far-left group's criticism. "There's no such thing as monolithic Islam. If anybody says there is, they don't know what they're talking about."

While he remains steadfastly loyal to Trump, Gorka did express concern about entrenched Washington bureaucrats who could short-circuit the president's agenda.

ABC11 has decided to slowly reduce the number of stories on the website that have a comments section. We believe very strongly that our audience should have an opportunity to discuss and debate events in our world, however, we have not been able to moderate the comments as well as we would like. Instead of hosting a platform that could allow a few loud and ugly voices to dominate a conversation, we want to encourage everyone to join us on our social media platforms and speak out there. Facebook: facebook.com/ABC11 Twitter: twitter.com/ABC11_WTVD
Report a correction or typo
Related topics:
politicschapel hillorange countycollege studentsrepublicansprotestuncfreedom of speechdemocratspoliticspresident donald trump
Copyright © 2021 WTVD-TV. All Rights Reserved.
TOP STORIES
Rape suspect shot by police chief in Newton Grove: Sheriff's office
Sen. Tillis co-sponsors bill to defund '1619 Project' in K-12 schools
Garner teens rescue classmates from burning car
Cary 16-year-old Claire Curzan is living her US Olympic dream
Outdoor dining should stay: Downtown Raleigh survey
Developers want to build two 40-story towers in downtown Raleigh
Trump announces visit to Texas to survey border situation
Show More
Person arrested with multiple guns inside car at UNC
Senate passes bill making Juneteenth a federal holiday
Raleigh activist says spike in crime is result of lack of resources
Research Triangle study may help save children's lives
AP: US military guns lost, stolen from North Carolina bases
More TOP STORIES News