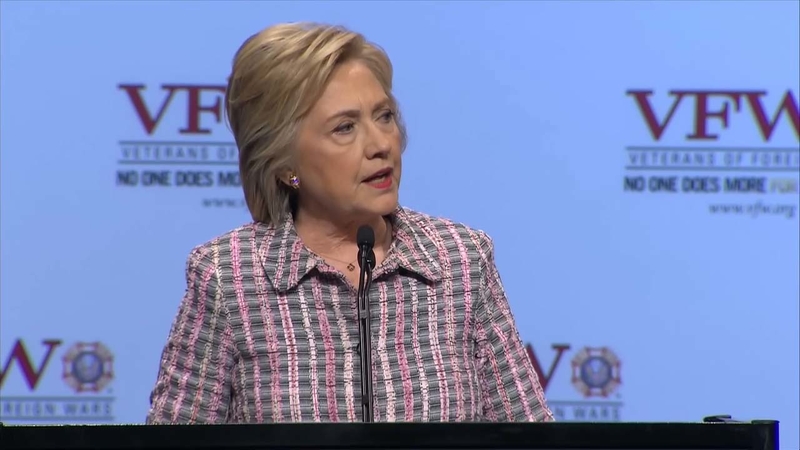 CHARLOTTE (WTVD) -- The importance of North Carolina in this election was no more evident than what we saw on the campaign trail Monday as Hillary Clinton and Donald Trump both made stops in the Tar Heel state.

North Carolina is considered a battleground state, with some calling it a purple state. Meaning it can go blue or red during the presidential election.

Hillary Clinton came to Charlotte Monday morning to speak to more than 10,000 veterans at the annual Veterans of Foreign Wars National Convention.

Clinton told the group that as veterans they need to know where the candidates stand on national security issues. She said a commander in chief faces no greater decision than the choice of sending American men and women to war.

Taking a shot at Donald Trump, Clinton said she is not interested in being provocative or insulting. Instead, she wants to bring the country together.

Clinton also addressed the VA scandal and the long waits and poor health care that many veterans have seen. Clinton called it "heartbreaking and unacceptable" and said she has a plan to fix it.

Clinton said VA reform would be one her highest priorities if elected and she does not want to see the system privatized. She wants it reformed.

Clinton to VFW members: "Thank you for standing up for veterans health, education,and dignity and security." #abc11 pic.twitter.com/0inhJcD9rJ

Following the VFW speech, Clinton spoke to campaign volunteers in Charlotte. She's next headed to the Democratic National Convention in Philadelphia.

Trump addresses the VFW on Tuesday.

Supporters lined up and braved the heat

He was joined by his running mate Mike Pence along with Governor Pat McCrory and Senator Richard Burr.

Supporters in Winston-Salem lined up for hours, braving the heat, waiting to get their spot inside.

Water, sunscreen, umbrellas oh my! #Trump supporters beating the heat ahead of his Winston-Salem rally at 8 #ABC11 pic.twitter.com/18r5hWLApS

"You're going to be known as the president that saved our nation," said Jane Myers from Clemmons, N.C. in a message to Donald Trump.

She was one of many in line leading the crowd in chants and cheers outside the venue.

Trump came to North Carolina on the heels of the Republican National Convention and a bump in the polls.

One poll out Monday shows that between Trump and Democratic rival Hillary Clinton, Trump now has 48 percent of the support over Clinton's 45 percent. Although another poll has the two candidates tied at 42 percent.

That bump in support could be coming from former democratic rival, Bernie Sanders' supporters. Numbers on that side of it show one in four of his voters polled say they still won't vote the Clinton ticket.

It's that momentum that has voters hoping that Trump will rise to the top in November.