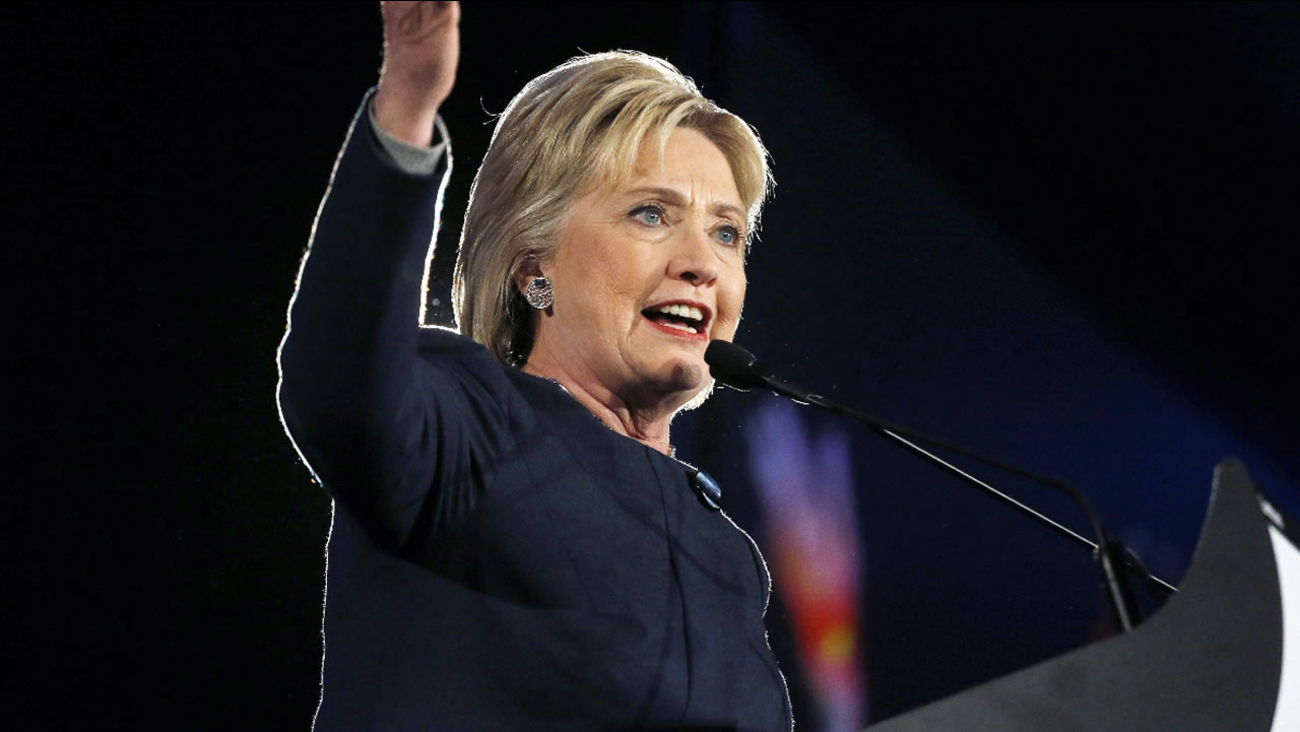 After a blowout victory Saturday in the U.S. Virgin Islands and a decisive win in the U.S. territory, Clinton is now less than 30 delegates short of the 2,383 needed to win the nomination, according to an Associated Press count.

"I'm for Hillary, girl," said 83-year-old Candida Dones. "I can't wait for a female president. She's one of us. She wears the pants. If we don't look out for our own interests, who will?"

As the results from Puerto Rico trickled in, Clinton maintained a steady 2-to-1 lead over Sanders.

While Puerto Rican residents cannot vote in the general election, the island's politics could reverberate into the fall campaign. Tens of thousands of Puerto Ricans have left the island to escape a dismal economy, with many resettling in the key electoral battleground of Florida.

Though Clinton did not spend much time campaigning in Puerto Rico, the victory is fraught with symbolism for her campaign. Eight years ago, with the presidential nomination slipping from her grasp, she rolled through the streets of San Juan on the back of a flat-bed truck, wooing voters to a soundtrack of blasting Latin music.

She beat then-Illinois Sen. Barack Obama with nearly 68 percent of the vote.

Both Clinton and Sanders spent Sunday in California, the biggest prize among the five states voting on Tuesday. Clinton told an enthusiastic crowd at Greater St. Paul Baptist Church in Oakland the country is "getting indifferent to the great toll of gun violence," while Sanders made a series of stops in Los Angeles before an evening rally in San Diego.

"Sorry to disturb your brunch," Sanders said at Hamburger Mary's, taking the microphone during their "drag brunch" as disco lights swirled inside. "I just wanted to say that on Tuesday as you all know there is a very important Democratic primary here in California. And my hope is that everyone will stand up and make clear it is too late for establishment politics."

While those watching the results in Puerto Rico focused on their impact on the race for the Democratic nomination, the focus of many voters on the island was its ongoing economic crisis.

Both Sanders and Clinton had pledged to help as the island's government tries to restructure $70 billion worth of public debt the governor has said is unpayable.

"This is one of the most important political moments for Puerto Rico," said Emanuel Rosado, a 29-year-old Clinton supporter. "I'm taking action as a result of the economic crisis."

Two weeks before the primary, Sanders criticized a rescue deal negotiated by U.S. House leaders and the Obama administration as having colonial overtones. In a letter to fellow Senate Democrats, Sanders said the House bill to create a federal control board and allow some restructuring of the territory's $70 billion debt would make "a terrible situation even worse."

He later promised to introduce his own legislation to help the island. Campaigning on the island last month, Sanders promised to fight against "vulture funds" on Wall Street that he said would profit off the fiscal crisis.

"That bill is anti-democratic and it's not in the best interest of Puerto Rico," said Jorge Gaskins, a 67-year-old farmer who supports Sanders and opposes a control board.

Clinton has said she has serious concerns about the board's powers, but believes the legislation should move forward, or "too many Puerto Ricans will continue to suffer."

Among those voting Sunday was Democratic Party superdelegate Andres Lopez, one of the party insiders who can vote for the candidate of their choice at the summer convention. He had remained uncommitted, but said Sunday he will support Clinton.

Clinton has 1,807 pledged delegates won in primaries and caucuses; Sanders has 1,516. When including superdelegates, her lead over Sanders is substantial - 2,355 to 1,562.

With Lopez's endorsement, all seven of Puerto Rico's superdelegates have pledged their support for Clinton.

"It is time to focus on squashing 'El Trumpo,'" he said, referring to presumptive Republican presidential nominee Donald Trump.