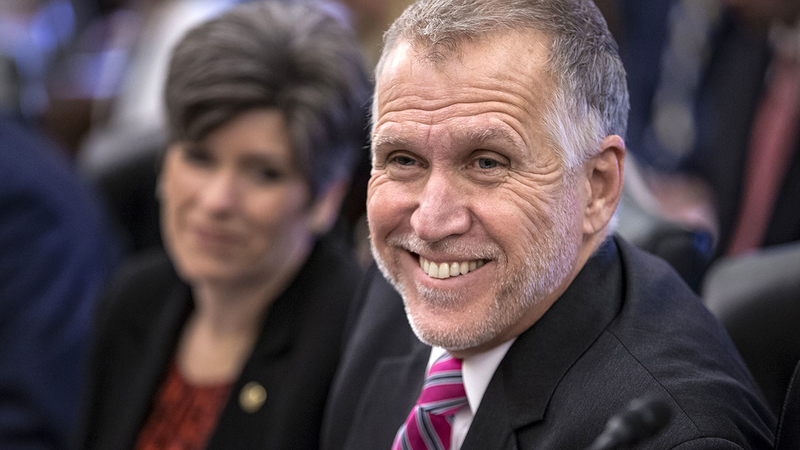 The NRA has spent $4.4 million on Tillis; almost $10,000 in direct contributions, the rest through indirect expenditures. The gun lobby spent nearly $2 million on pro-Tillis ads and almost $2.5 million on ads against his opponent in 2014, former Democratic Sen. Kay Hagan.

The data, compiled by the Center for Responsive Politics, shows all of the Republicans in North Carolina's delegation benefited from NRA contributions. The three Democrats in the delegation (GK Butterfield, David Price, and Alma Adams) took a combined $0.

Tillis' office emailed a statement accusing his detractors of political gamesmanship, with spokesperson Daniel Keylin writing, "While some in Washington are unfortunately intent on advancing an incredibly polarizing agenda to score cheap political points, Senator Tillis believes all members of Congress need to start working together to address the threat posed by radical Islamic terrorism both at home and abroad."

Keylin went on to explain Tillis' votes Monday, including a "yes" on an amendment submitted by Republican Sen. John Cornyn of Texas.

"The Cornyn amendment could also permanently block the sale of the gun, as the three business day period allows the Justice Department to do so through the courts. Republicans and some Democrats opposed the Feinstein amendment because it would revoke someone's constitutional right without any form of due process through our legal system, especially troubling because the No Fly List is notorious for having a lot of errors and individuals who shouldn't be on the list. I'll also point out that the Cornyn amendment goes even further than Feinstein by allowing authorities to directly take the suspected terrorist into custody if they pose an immediate risk."

Advocates for stricter gun control said Tillis and Burr voted down a pair of stronger measures, including the Feinstein amendment.

Igor Volsky with the CAP Action Fund said, "I don't think the alternatives they're offering are workable for law enforcement, for the government. What they do provide is cover for these lawmakers to vote against very popular measures, either that's expanding background checks or ensuring that people on the terrorist watchlist don't buy weapons."