WTVD
By Joel Brown
RALEIGH, North Carolina (WTVD) -- North Carolina's senior senator found himself Friday in the friendly confines of the downtown Raleigh Sheraton ballroom -- jam-packed with like-minded Republicans; a brief respite from the hot glare Sen. Richard Burr is under back in Washington as chairman of the Senate Intelligence Committee -- charged with investigating allegations of Russian interference in the presidential election

"Now, it's been a little challenging week for me," Burr said to laughs from the audience at a lecture forum for The Jesse Helms Center.

Outside the Raleigh hotel, there were loud reminders of the controversies Burr finds himself in the middle of. Protesters demanded Burr take a tougher stance against President Donald Trump's abrupt firing of FBI director James Comey.

President Trump tweeted, "Comey better hope that there are no 'tapes' of our conversations before he starts leaking to the press!"

RIGHT NOW IN RALEIGH: @SenatorBurr: "It's been a challenging week for me." #TrumpRussiaInvestigation #abc11 pic.twitter.com/Q51xOrVhQw

Back at the Sheraton, the senator only alluded to his new stresses on Capitol Hill.

"This year, as I like to say, every day is a Monday," Burr quipped.

Burr declined reporter's attempts for interviews after his remarks. Staffers quickly hurried him out of the hotel through a fire-exit door.

ABC11 reporter Jonah Kaplan tracked down Tillis in the hotel hallway to ask for Tillis' thoughts on the president's firing of Comey.

"It's not the way I would've done it," Tillis said before being whisked away by staff.

Tillis' and Burr's appearances in North Carolina come as the news hit that Comey has declined Burr's invitation to appear before the Senate Intelligence Committee next Tuesday.

Burr said his staff would likely work something out in the near future for a private meeting with Comey instead. 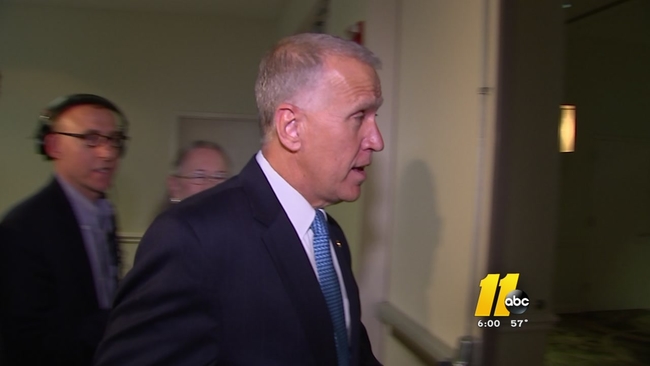 Tillis on Comey firing: 'Not the way I would've done it'
More Videos
From CNN Newsource affiliates
TOP STORIES