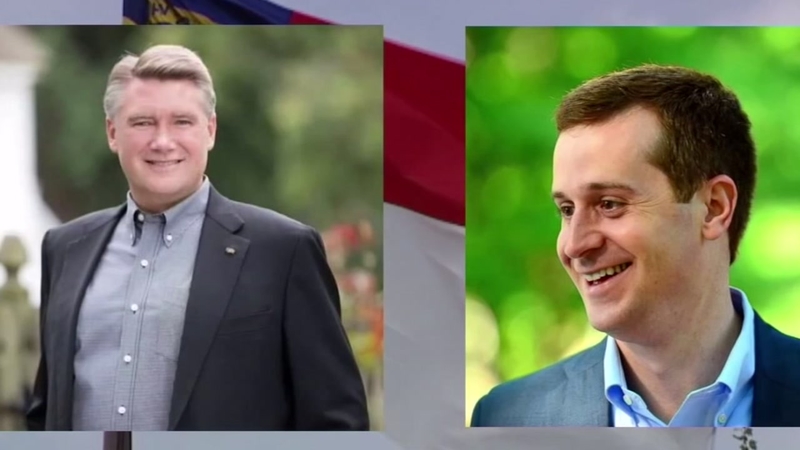 TODAY: 424 Congressmen will be sworn-in on Capitol Hill. #425 is the race between @MarkHarrisNC9 & @McCreadyForNC - tainted by allegations of voter fraud. @ABC11_WTVD can confirm that Harris, the vote leader, is in #Raleigh meeting w/ @NCSBE investigators. #NC09 #NCPol pic.twitter.com/R1DSKAmjJl

Mark Harris, the Republican candidate who currently leads Democrat Dan McCready by about 900 votes, filed a motion in Wake County Superior Court on Thursday demanding the certification of the election.

Republican Mark Harris speaks about his desire to have the 9th District election certified amid election fraud accusations.

"The fact remains that a critical election hangs in the balance," Harris' attorneys write in their 57-page briefing. "The voters of the Ninth Congressional District are entitled to have their elected representative in place by the time Congress convenes."

Instead of being in Washington, Harris was in Raleigh on Thursday, meeting with state officials about allegations of voter fraud that may have tainted the race.

"We came here today to be cooperative, we came here today to be helpful, we came here today to answer questions to help them discover whatever it is they need to discover," Harris told ABC11 after the meeting. "We think there should be no reason to doubt the legitimacy of the outcome. I don't have anything that's more valuable than my good name and I intend to stand on that good name and reputation that I've built over 30 years as a senior pastor in the State of North Carolina, the leadership I've been able to bring. I will continue to stand on that reputation and stand on who I am as a man."

Harris' visit to Raleigh follows a subpoena issued on December 6th by the North Carolina State Board of Elections and Ethics Enforcement. A day later, Harris posted a video saying he'd "wholeheartedly support" a new election *if* the investigation finds fraud could've affected the outcome of the election.

Democrat Dan McCready last weekend requested subpoenas for dozens of people - including Harris, North Carolina GOP Chairman Hayes, Executive Director Dallas Woodhouse, and McRae Dowless, the political operative who is at the center of the allegations of harvesting absentee ballots.

Asked specifically about the allegations against Dowless, Harris said he hasn't seen "any reason at this point" to say he wouldn't hire Dowless again.

Harris, meanwhile, tried petitioning for immediate certification in December so he can sworn-in with the rest of the 116th Congress in Washington on Jan. 3.

Harris' motion on Thursday follows another petition for immediate certification that he submitted last month. That petition, however, was relevant for only a few hours, as the nine-member State Board dissolved at noon on Dec. 28.

The uncertainty surrounding its replacement, moreover, is another core controversy which also has an impact on McCready's request for subpoenas: who right now can be the legal entity to investigate the allegations, oversee the hearing, judge the evidence and rule either on certification or a new election?

Per court order -- and new state law -- North Carolina elections will soon be managed and safeguarded by a five-member Board of Elections and a separate Board of Ethics, with all members nominated by Governor Roy Cooper. That law, however, doesn't take effect until Jan. 31.

Gov. Cooper sent letters to state leaders of both Democrats and Republicans for names to be considered for a temporary five-member Board of Elections to continue the probe into how absentee ballots were gathered, but Republicans have been quick to denounce the effort as "unconstitutional" and proclaiming they won't be "bullied" into accepting nominations to an "interim" board.

The saga over the elections board dates back to 2016 when Republicans tried to reduce the governor's role in managing elections in a Special Legislative Session after Cooper's election win over incumbent Gov. Pat McCrory. Then Gov.-Elect Cooper sued and ultimately won in court -- many times -- and a GOP-sponsored constitutional amendment failed to keep the changes.

With Republicans now refusing to participate in an interim board, GOP leaders are signaling their gameplan for immediate action would take place in federal court, which could ultimately decide if the governor has the constitutional authority to nominate a temporary board. The court could also decide whether the state is failing to fulfill its duty and certify Harris' election win.