WTVD
FAYETTEVILLE (WTVD) -- Hundreds of flags whip in the wind through the North Carolina Field of Honor. On Tuesday, retired Army Sergeant Joshua Mullins found his, and cried in his wife and daughters' embrace.

The family, now living outside Fort Campbell, KY found that flag in Fayetteville the same day President Obama laid out a plan to responsibly end the war in Afghanistan.

"Looking at our history, every place we put a foot in, we have never left," Mullins said.

The plan, dependent of the signing of the bilateral security agreement, calls for an end to the U.S. combat mission by 2014, and dramatic reduction in troops next year--scaling back from 32,000 to 9,800. By the end of 2016, there will be an embassy presence and security force of about 1,000. Those left behind will most likely be a mix of Special Operations and "normal" duty troops. It's unclear where those troops will be pulled from to fill those slots.

"We all left to go and we all should come home as one," said Mullins of the planned phase-out. "I don't ever want to think that my daughter or anyone else who joins in after I done my duty would be left behind. I wouldn't like it."

"I just wish they would all come home and it would be over," said Army spouse, Monica Yankaway, whose husband deployed at the beginning of the conflict to set up hospitals.

This announcement leaves a string of questions for military families across the region, who have been the backbone of a 13-year war.

"I don't know if the job is done," said Sherry Lahr, the Fayetteville wife of a retired Army Master Sergeant who deployed several times to Iraq and Afghanistan.

Lahr and her young daughter were in the Field of Honor Tuesday, making up for a visit they couldn't make on Memorial Day. The thought of leaving Afghanistan too soon brought her to tears.

"To abandon, you know everything that all of these people have died for...it's just heartbreaking," she cried. "And I just think [President Obama] may be a little lost. I pray for him too, because he needs strength through this because he needs a little more divine guidance on this or something."

For 23-year-old April Rugglus, the daughter of a retired Marine, the announcement is something she believes the younger generation will have to see to believe.

"I think it's difficult for us to trust what the government is saying," she said. "I feel like we don't really believe there's too much integrity in terms of following through with one's word."

"We step foot on their soil. So are we there to change them? No," said Mullins. "Are we there to stop them from coming over and hurting us and our families? Yes. So has our mission been completed? Not necessarily, because you still have those ones looking to come over and destroy us just because we're American." 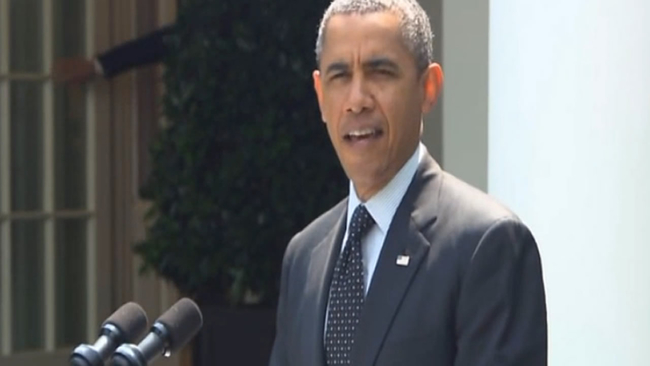