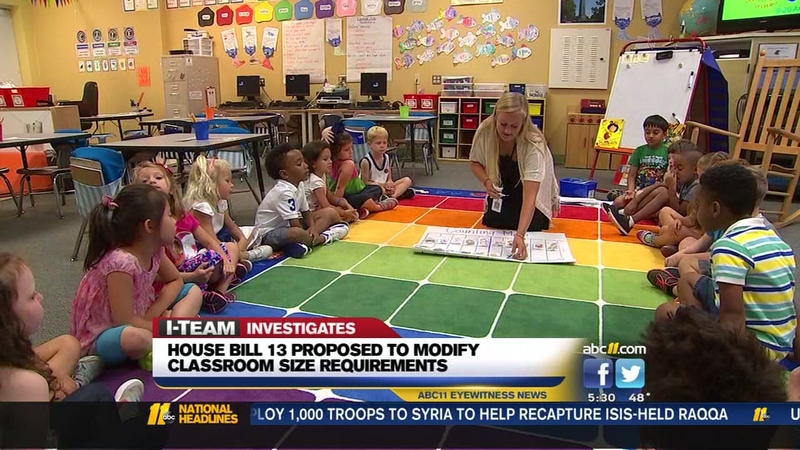 House Bill 13 is being held up by the NC Senate

RALEIGH, North Carolina (WTVD) -- A bill to shrink K-3 class sizes in North Carolina is getting a lot of support and causing a lot of concern. House Bill 13 passed the House of Representatives 114-0 but it has stalled in the Senate.

Educators say that's a problem because school systems aren't getting critical guidance with regard to budgeting and planning for the 2017-2018 school year.

An initial version of the bill caused major consternation among advocates for North Carolina's public schools. It required schools to lower class sizes but didn't put in any more money to pay for the extra classes and teachers that would have been needed to cover the move. Effectively, that would have meant teacher layoffs in less essential areas such as physical education, art, and music.

Mark Jewell, President of the North Carolina Association of Educators, said 4,500 teaching positions were at risk and that 400 new classrooms would have had to be created statewide to cover the mandate. But Jewell and NCAE support a so-called "fix" to HB13 that would give schools more flexibility and allow up to three more children per class than the lower standard in the bill.

The "fixed" bill passed unanimously in the House but has stalled in the Senate. Top Republicans there have said they want to learn more about the changed flexibility in the bill and asked for a study. But there's a problem.

Right now, school systems are plotting their path for next year. They're writing their budgets for the 2017-2018 school year and they should be sending out layoff notices to teachers who will lose their jobs. But until the legislature finds resolution to HB13 and the class-size dilemma, all that is up in the air.

Legislative observers have called the Rules Committee "a place bills go to die."

Jewel implored the Senate to move on the bill. His group is circulating this petition urging lawmakers to pass the bill.