New NC elections maps: Redistricting or more of the same? RALEIGH, North Carolina (WTVD) -- State lawmakers are steeling themselves for an earful Tuesday afternoon when it comes to how they've drawn up new political boundaries.

They're holding the first - and potentially only - public comment session on proposed new maps for both the House and Senate before they're voted on and submitted to the Court for review.

Data showing how the maps were drawn can be found here and critics say it's critical to be able to get under the hood to understand what criteria was used to dice up the state's political landscape.

Bob Phillips, with the non-profit Common Cause, has long lobbied for a non-partisan approach to drawing the maps and told the I-Team he's afraid a major reform opportunity may be passed up.

"There was one public meeting a few weeks ago where about 40 speakers spoke out overwhelmingly saying politics should be taken out of the process," Phillips said. "The only one who spoke in favor of the current process was (NCGOP Executive Director) Dallas Woodhouse."

Phillips was careful to point out Democrats did it too, when they were in charge, but he said without taking politics out of the process, Republicans will be able to effectively write their own future.

"They know exactly what their legislative majority will look like. They already know that because they had to use political data to draw the map,"

The maps for both the House and Senate were released during the weekend but the data behind them was not. The maps were published with broad strokes only and not parsed down to the precinct level. And as Phillips describes it, that's where the gerrymandering happens.

Like the rest of us, Phillips got his first look at the details Monday morning but he said even the broad lines suggested basic political motivations.

But Phillips said the maps that were put out over the weekend lay bare political motivations of the makers in at least one key way.

He notes that in at least a handful of districts where Republican representatives are "double-bunked" - where two incumbent lawmakers get pushed into effectively one district - Republican candidates have already announced plans to retire.

"Fair maps don't mean that every district will be up in the air," Phillips lamented, "but at least it would have meant a process that wasn't rigged from the start. That's the other part of the problem, it was done without any transparency.

They had the public meeting; they talked about criteria," Phillips said. "But then they did exactly what they did in 2011 with hired experts, using political data to rig it so they have, probably, a political majority again."

The details in the so-called "stat pack" released Monday will be important for people who want to show up at Tuesday's public comment session at the state legislature. It starts at 4 p.m. People can start signing up to speak at 3 p.m. Sign-ups last until 6:30.

"The real question," Phillips said, "is what will the court say? Will the court be good with this? Republican leadership wants to walk as close to the line as they can, to maintain their supermajority without being in violation of the Constitution."

Republicans are, in a sense, in a political pressure cooker, imposed by the court, which ruled that maps used in the last election were unconstitutional and gave lawmakers until September 1 to ratify (read: vote on and pass) new maps.

"Lawmakers don't want to go back to court," Phillips conjectured, "because the other thing the court could do is take it over and assign a drawing of the maps to a 'special master.' Leadership really doesn't want that."
Report a correction or typo
Related topics:
politicsraleighvotingstate politicsgeneral assemblynorth carolina news
Copyright © 2021 WTVD-TV. All Rights Reserved.
RELATED 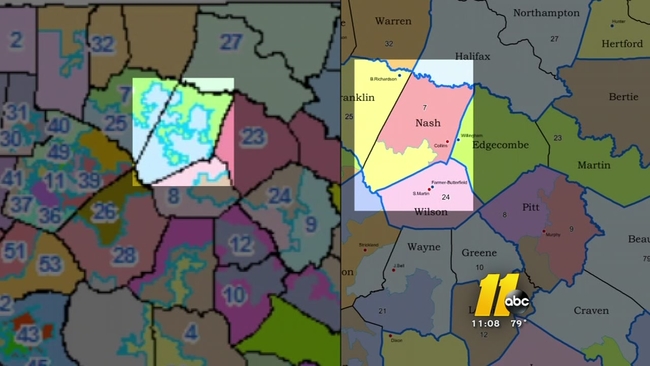