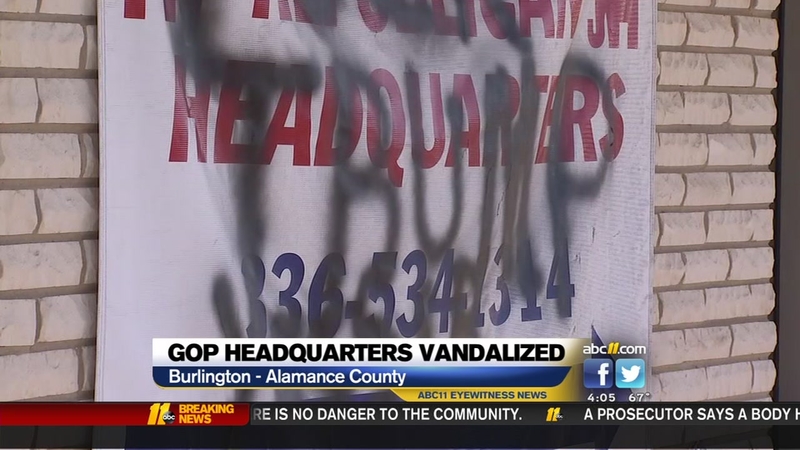 Dallas Woodhouse, executive director of the North Carolina Republican Party, sent ABC11 photos that show the headquarters on Ramada Road in Burlington with graffiti spray-painted on walls, signs, and doors.

"F*** Trump" was written on a wall, and "NA" spray-painted on the door. "Republican" is crossed out in paint on a sign.

The Burlington Police Department circulated a surveillance photo of a suspect.

Burlington police released this surveillance photo of the suspect.

Anyone with information should contact the Burlington Police Department at (336) 229-3503 or anonymously to the Alamance County-wide Crimestoppers at (336) 229-7100. Crimestoppers is a partnership between the public, the media, and the police to fight against crime that may provide a reward of up to $2,500 for information that leads to an arrest.

"It's an unfortunate thing. Really, it's sad that someone wants to express themselves that way as opposed to having a civil discussion and talking about where we have differences," said Alamance County GOP Chairman Ben York.

"I mean, it's like people don't have any respect for nothing anymore. Not for anybody's property and it's just really, really terrible to see people do something like this for an election," offered resident David Woodruff.

Last month, someone threw a bottle filled with flammable liquid through the front window of the Orange County Republican Party headquarters in Hillsborough.

"One of life's greatest opportunities is to bring healing when you've been treated unfairly or wronged,' Walker said. "These words of hate create an opportunity for us to serve one another, be hands and feet for this community, and to do so with grateful hearts. We are incredibly blessed to live in a country where we may live and work in accordance to our peacefully held beliefs without fear of encountering violence."