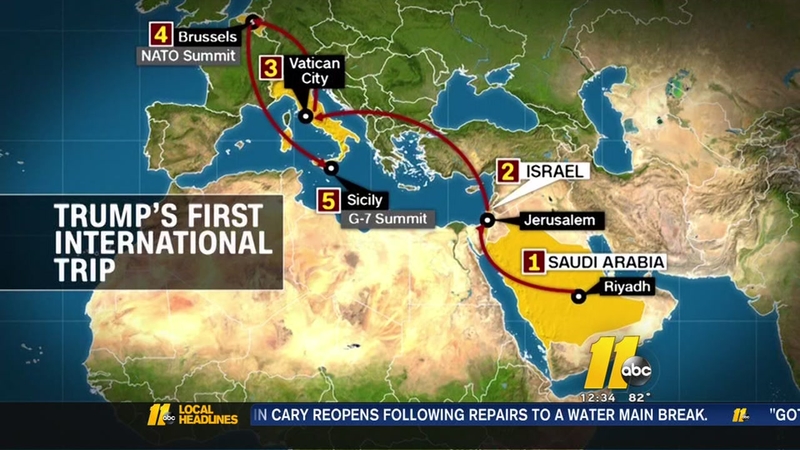 WASHINGTON -- President Donald Trump will leave Friday afternoon on his first international trip since taking office, a five-country journey to meet with some of the most important figures in the Middle East and Europe.

Trump is bucking tradition by journeying away from North America for his first foreign trek -- the past five presidents all visited U.S. neighbors Canada or Mexico as their first venture abroad.

The president's first stop will be in Saudi Arabia, before continuing to Israel, Italy, Vatican City, and Belgium. Along the way, he will meet with King Salman of Saudi Arabia, Israeli Prime Minister Benjamin Netanyahu, Palestinian President Mahmoud Abbas, Pope Francis, Italian President Sergio Mattarella, King Philippe of Belgium, and the leaders of the G7 countries, among others.

Earlier this month, an administration official portrayed the decision to first visit Saudi Arabia -- home to two of Islam's holiest sites, Mecca and Medina -- as symbolic.

"We thought that was very important because, obviously, people have tried to portray the president in a certain way, but I think that what he wants to do is solve the same problem that a lot of the leaders in the Islamic world want to do," a senior administration official told ABC News.

Pope Francis commented on Trump's visit last weekend, saying that he would not judge the controversial president despite having divergent views on a number of issues, including climate change and immigration.

"I will tell him what I think, he will tell me what he thinks, but I never wanted to judge someone before I listen to the person first," Pope Francis said.

The trip will conclude with the president meeting NATO leaders and attending a G7 summit. Trump has previously met with all of the G7 leaders except French President Emmanuel Macron, who took office within the last week.

Friday morning, Trump tweeted that he was preparing to embark and that while abroad, his focus would be on the country he represents.

Getting ready for my big foreign trip. Will be strongly protecting American interests - that's what I like to do!

"Getting ready for my big foreign trip," wrote Trump. "Will be strongly protecting American interests - that's what I like to do!"