Protesters: 'Pack your bags, Pat' but gov race not over 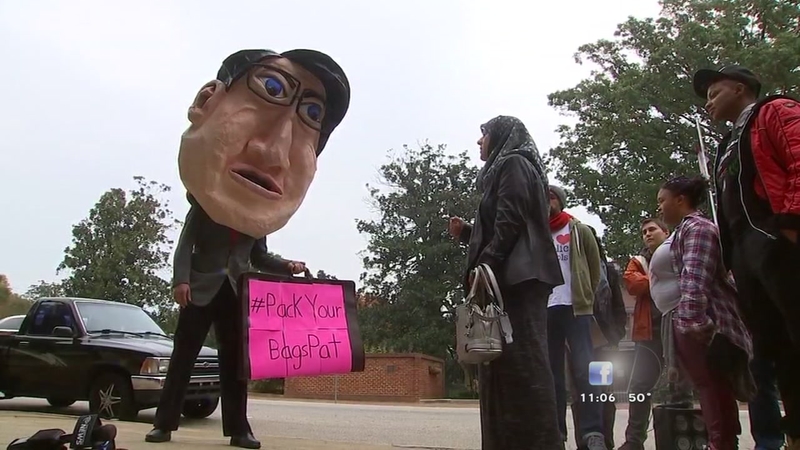 RALEIGH (WTVD) -- The decision of which candidate will move in or out of the Executive Mansion on Jan. 7 will likely come down to provisional ballots.

They are what voters use at the polls if there's any type of problem, like an address error or if a voter's name is somehow missing from the registration rolls.

It's unknown how many provisionals were cast. But, they have not yet been counted. And they could decide the race.

Despite the uncertainty, when Roy Cooper came to the podium inside the downtown Raleigh Marriott in the early hours of Wednesday morning, he declared victory.

"Because of your hard work, we have won this race for governor of North Carolina!" Cooper said to wild cheers.

Cooper did come out on top. Just barely.

The Attorney General eked out his gubernatorial win by just 4,980 votes.

"The election is not over in North Carolina," McCrory told exuberant supporters.

McCrory's team is counting on those provisional ballots to turn the race back in his favor.

Now, both sides are deploying a team of attorneys and volunteers to oversee the process.

The state GOP Chairman, Robin Hayes, took to YouTube to pledge the full resources of the party in support of the governor.

"And we are confident that once all the votes are counted, North Carolina will continue to prosper under four more years of Pat McCrory's leadership," Hayes said in the video.

Back at the governor's mansion, some of McCrory's biggest critics -- LGBT activists who pushed hard to unseat the governor for signing House Bill 2 into law -- were already scheduling his moving day.

"We believe that he deserves to be out of office," said activist China Model. "Just like thousands of other North Carolinians across the state believe."

County election boards have until Nov. 18 to verify and count their respective provisional ballots.

If the vote difference is less than 10,000 votes, either candidate can request a recount.

If a recount occurs, it will not be until Nov. 29 before the State Board of Elections certifies a winner.