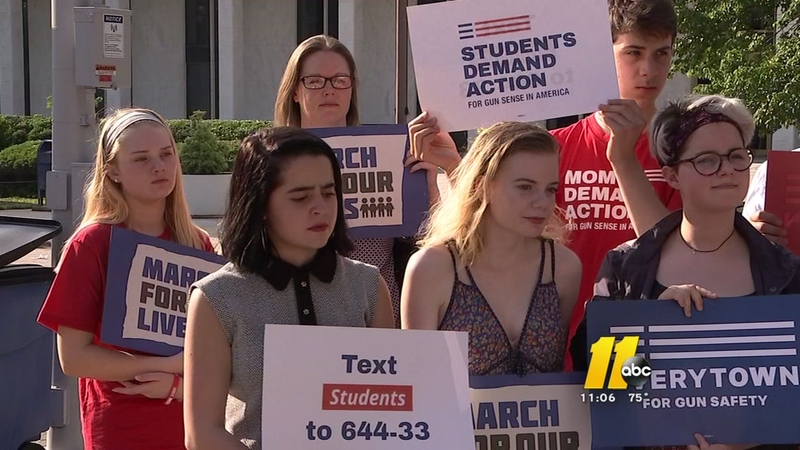 RALEIGH, NC (WTVD) -- Four days after the nation's latest school shooting in Texas, a group of Raleigh high schoolers arrived at the state legislature fighting for some kind of political response to the epidemic.

That's what House Bill 976 is supposed to be. It was filed this week, aimed at taking guns out of the hands of dangerous people. But it appears to be dead on arrival on Jones Street.

"When is enough, enough?" asked Durham Democratic State Rep. Marcia Morey as she and her fellow House and Senate Democrats rolled out their newest proposal to stem gun violence.

HB976 creates what they are calling an Extreme Risk Protection Order -- establishing a legal mechanism for family members or guardians -- to remove guns and ammo from any individual, at least temporarily -- if the person threatens to do harm to themselves or to others.

"This is not a solution to gun violence, but it is a first step," Morey said.

The bill's supporters tried to ease concerns that this was an attempt to restrict access to firearms.

"This is not going to hurt anybody who is a lawful possessor of firearms who wants to use it for hunting or other lawful means," said Durham Democratic Sen. Floyd McKissick.

But hours after the bill's introduction, House Speaker Tim Moore, a Republican, sent the legislation to the House Rules Committee -- referred to by many lawmakers as "the place bills go to die."

That was good news for many guns rights activists, who say the bill takes away due process for gun owners.

"Really all they're intended in doing is blaming the gun and allowing the dangerous person to remain in the general population," Valone said. "We should all, regardless of whether we support gun rights or not, we should all be alarmed at the fact that they take away individual freedoms without due process of the law."

And while the gun-reform debate raged inside the legislature - Outside the General Assembly, Greear Webb and his classmates at Sanderson High rallied for a non-partisan solution.

"The realization came to us that we as students had to be the ones to begin the difficult conversations to call for substantial change and to press forward in search of a more peaceful time," Webb said at a news conference.

The North Carolina Town Hall for School Safety is scheduled for next Tuesday, featuring a panel of lawmakers and law enforcement officials alongside school and mental health experts.

"Like we said, dialogue is important and we can help encourage legislators to work in our benefit and towards our safety," said Sanderson High junior Woody Wisz, who is helping to organize the event.