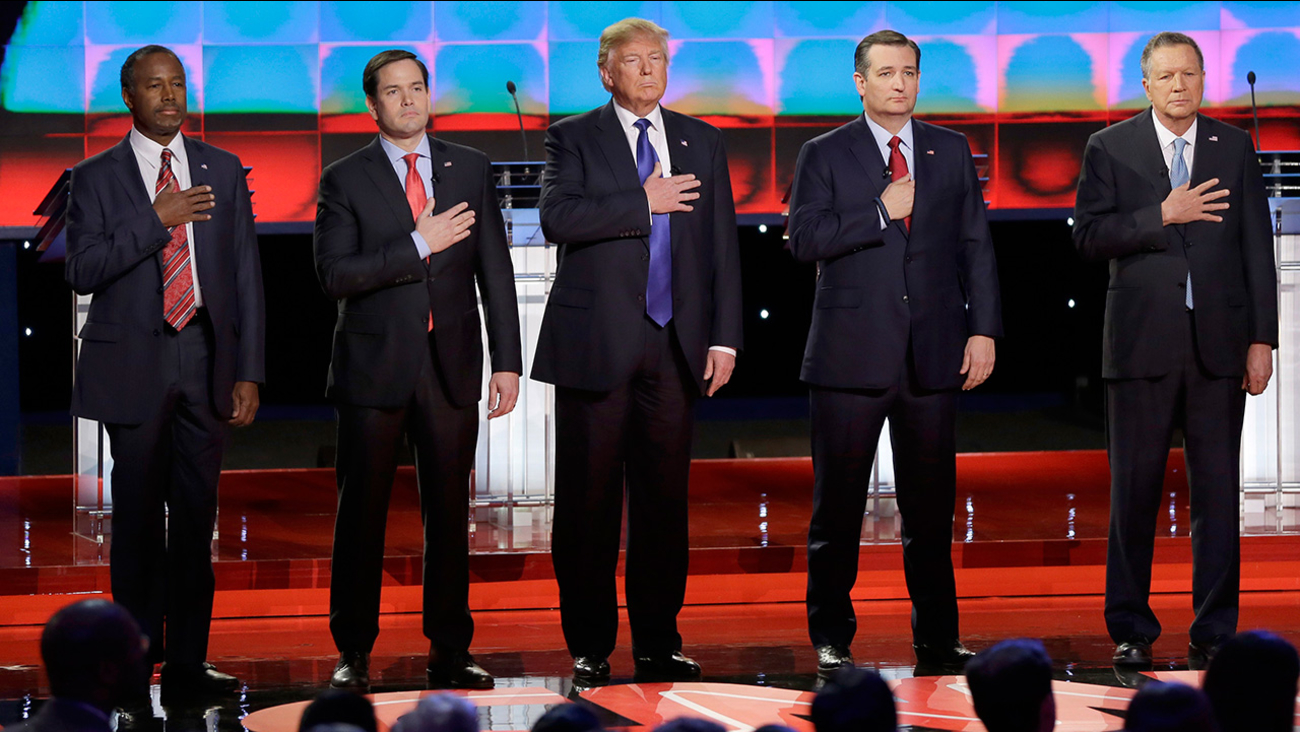 AP
LEESBURG, Virginia -- The final-days sprint to Super Tuesday has erupted into a feud over a white supremacist as Donald Trump's Republican rivals scramble to stop the billionaire businessman from becoming an "unstoppable" force in the 2016 presidential contest.

Ted Cruz and Marco Rubio continued to hammer the GOP front-runner's character and lack of policy specifics in a series of attacks Sunday while courting voters across the South. But it was Trump's refusal to denounce an implicit endorsement from former Ku Klux Klan leader David Duke that dominated the narrative less than two days before Republican voters across 11 states head to the polls.

The new focus comes as Trump's rivals acknowledge that time is running out to prevent the former reality television host from becoming the Republican Party's presumptive nominee. He took a new step in that direction by earning the endorsement of Alabama Sen. Jeff Sessions, a would-be Cruz ally who backed Trump instead.

"There is no doubt that if Donald steam rolls through Super Tuesday, wins everywhere with big margins, that he may well be unstoppable," Cruz said Sunday on CBS' "Face the Nation."

Trump was asked Sunday on CNN's "State of the Union" whether he rejected support from the former KKK Grand Dragon and other white supremacists after Duke told his radio followers this week that a vote against Trump was equivalent to "treason to your heritage."

Cruz soon responded on Twitter, telling Trump: "You're better than this. We should all agree, racism is wrong, KKK is abhorrent."

Rubio went further in a message to thousands of supporters in Leesburg, Virginia: "We cannot be a party who refuses to condemn white supremacists and the Ku Klux Klan," Rubio said. "Not only is that wrong, it makes him unelectable. How are we going to grow the party if we nominate someone who doesn't repudiate the Ku Klux Klan?"

Trump was asked Friday by journalists how he felt about Duke's support. He said he didn't know anything about it and curtly said: "All right, I disavow, ok?"

He hasn't always claimed ignorance on Duke's history. In 2000, he wrote a New York Times op-ed explaining why he abandoned the possibility of running for president on the Reform Party ticket. He wrote of an "underside" and "fringe element" of the party, concluding, "I leave the Reform Party to David Duke, Pat Buchanan and Lenora Fulani. That is not company I wish to keep."

Trump has won three of four early voting states, roiling a party divided over the prospect of the brash billionaire becoming its nominee. Late Sunday, Nebraska's Ben Sasse became the first sitting Republican senator to say explicitly that he would not back Trump if he does win the nomination.

"If Trump becomes the Republican nominee my expectation is that I'll look for some 3rd candidate - a conservative option, a constitutionalist," Sasse wrote on Twitter.

The Duke debate seeped into the Democratic contest, as Vermont Sen. Bernie Sanders also lashed out on Twitter: "America's first black president cannot and will not be succeeded by a hatemonger who refuses to condemn the KKK."

Hillary Clinton re-tweeted Sanders' message. She scored a lopsided victory in South Carolina the day before, fueled by a huge advantage among African-Americans, a key Democratic constituency that will also play a dominant role in several Super Tuesday states.

Clinton turned her attention to the Republican field, all-but-ignoring rival Sanders from campaign events in Tennessee on Sunday.

Starting her morning with stops at two Memphis churches, Clinton offered an implicit critique of Trump, issuing a call to unite the nation and asking worshippers to reject "the demagoguery, the prejudice, the paranoia."

While she never explicitly mentioned Trump's name, the comments referenced his campaign slogan, "Make America Great Again." ''America has never stopped being great, our task is to make American whole," said Clinton at Greater Imani Cathedral of Faith, prompting a chorus of "amens" from the crowd.

The latest shake up in the GOP race comes as attention shifts to the South, where the region will dominate on Super Tuesday - March 1 - and the weeks beyond.

Trump holds commanding leads across the region, with the exception of Cruz's home state of Texas, a dynamic that puts tremendous pressure on Rubio and Cruz as they try to outlast each other and derail Trump.

Trump mocked the Republican establishment and his flailing rivals. "It's amazing what's going on," he told NBC, calling his campaign a "movement."