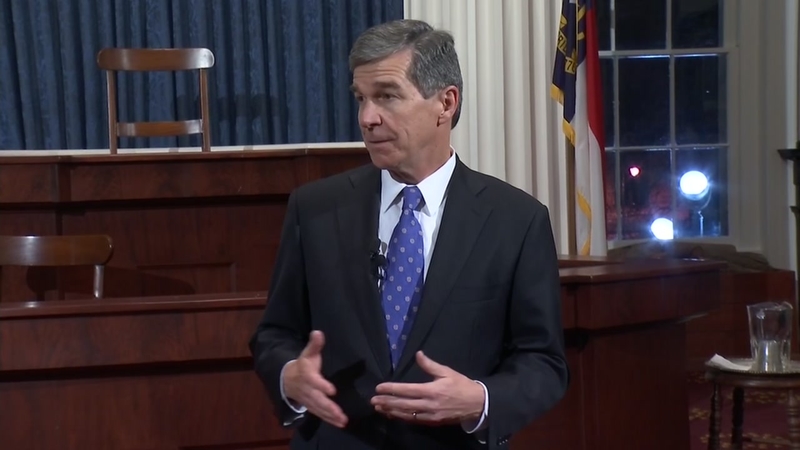 Roy Cooper sworn in as governor

RALEIGH (WTVD) -- There's no need for moving trucks for things to get moving.

Gov. Roy Cooper on Monday spent his first full day in office making a series of appointments as he makes a quick transition from Attorney General to Chief Executive.

"As we start this new year, as we go to work, let's keep in mind the work that we have ahead and that we have to keep our eye on the horizon," Cooper said early Sunday after his late-night swearing-in ceremony. "I'm aware of the solemn responsibility that I've been given and the duty I have to uphold the Constitution."

WATCH: Roy Cooper speaks after he is sworn in as governor
EMBED More News Videos

After winning a bruising campaign against former Gov. Pat McCrory, Cooper is destined for more contentious battles with his Republican colleagues in the General Assembly; the GOP maintains large majorities in both the House and Senate.

"I know and I am confident that although we may come at it from different ways, other leaders in this state and I can work together to make North Carolina its very best. The kind of North Carolina that we know that we can be."

Republicans already drew a line in the sand last month at a special session, passing two critical and controversial laws limiting executive power and transferring some of those powers to the legislative branch. HB 17, for instance, shrunk Gov. Cooper's staff from 1500 to 425.

Cooper, the state's 75th governor, has filed lawsuits challenging HB17 as well as SB4, which changes the makeup of elections supervision in the state. Decisions are pending in those cases.

Perusse leaves his job as chief operating officer for the University of North Carolina system to join Cooper's team. Previously he has worked as State Budget Director and as a lead fiscal analyst for the NC General Assembly.

Gibson is one of the longest serving state personnel directors and has led the NC Department of Justice Human Resources Department for 16 years.

McKinney served as Special Counsel to Cooper in the NC Attorney General's office, and prior to that worked in private practice in South Carolina and for the US State Department.

Talley brings years of state government communications experience to the job. Talley most recently was Public Information Officer for the NC Department of Justice.

"We are putting together a deeply talented team and I'm excited that these experienced leaders with proven results will help me move our state forward," Cooper said in a release.

Other Cooper Administration senior staff and cabinet officers will be announced. North Carolina's inauguration ceremonies will be January 7 in downtown Raleigh.

LATEST: 50% of adults in NC have received at least one vaccine dose

LATEST: More than half of NC adults at least partially vaccinated