"North Carolina's laws prohibiting same-sex marriage are unconstitutional as a matter of law," wrote Cogburn. "The issue before this court is neither a political issue nor a moral issue. It is a legal issue."

The ruling that came down around 5:30 p.m. was met with celebration among scores of same-sex couples who had spent hours lined up at county courthouses across the state, awaiting a ruling allowing them to marry.

"Even before this I was happy, but I think now that it's on paper and it's legal - it's a commitment between two people," Biggs said.

But the celebration was not universal. The amendment to the state constitution banning gay marriage was overwhelmingly approved by voters in 2012, and many voiced disappointment Friday. The ruling came despite attempts by North Carolina's Republican leadership in the General Assembly to intervene in two cases seeking to overturn the ban in federal court.

Democratic Attorney General Roy Cooper said all legal avenues had been exhausted and he would give up the fight, but House Speaker Thom Tillis and Senate leader Phil Berger hired California lawyer John C. Eastman, chairman of the conservative National Organization for Marriage.

Tillis, who is running for U.S. Senate, said in a debate this week that he felt obligated to defend the will of North Carolina voters against "liberal activist judges." The recent rulings striking down gay marriage bans across the nation as unconstitutional have been handed down by federal judges appointed by presidents from both parties.

The U.S. Supreme Court announced Monday it would not hear appeals of decisions striking down similar marriage prohibitions in other states. In July, the 4th Circuit Court of Appeals struck down Virginia's gay marriage ban. The appeals court in Richmond has jurisdiction over North Carolina, and judges here are required to follow its ruling.

Berger and Tillis issued a joint statement after the ruling.

"While we recognize the tremendous passion on all sides of this issue, we promised to defend the will of North Carolina voters because they - not judges and not politicians - define marriage as between one man and one woman and placed that in our state constitution. It is disappointing this decision was made without North Carolina's law receiving its day in court, and we will continue to work to ensure the voice of the voters is heard," they said.

Governor Pat McCrory said he will abide by Friday's ruling.

The ruling was hailed by the American Civil Liberties Union of North Carolina, which represents nine same-sex couples who challenged the ban.

"This is a historic day for freedom and equality in North Carolina," said Jennifer Rudinger, Executive Director of the ACLU of North Carolina. "Thousands of North Carolinians are now able to marry the person they love and receive the dignity and legal security that comes with having that marriage recognized in their home state. For countless couples and their children, this victory is nothing short of life changing." 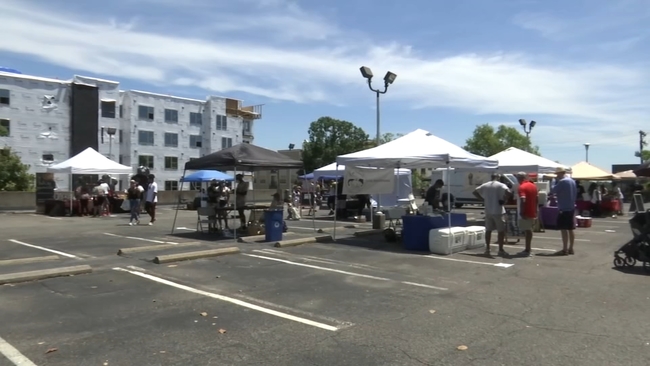