Sanford Army Chaplain fights for husband, who is facing deportation to Honduras 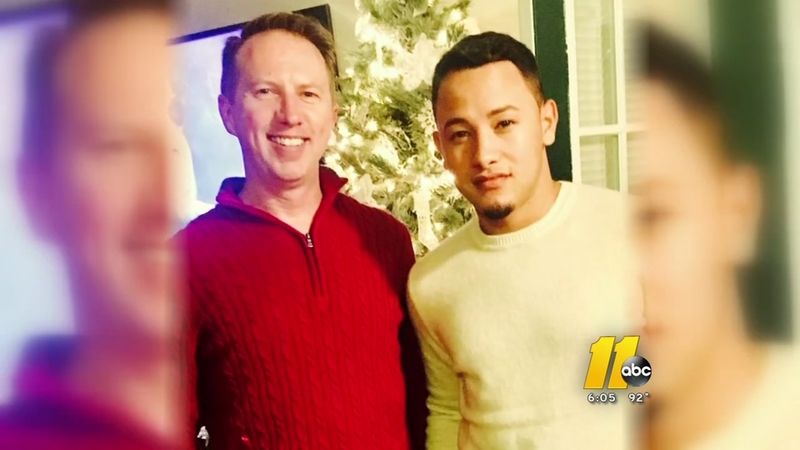 Sanford Army Chaplain fights for husband, who is facing deportation to Honduras

US Army Chaplain Tim Brown of Sanford is fighting for his husband facing deportation back to Honduras.

"I will not stop. I am determined. I am persistent. and I am an advocate for humanity," said Brown.

On Thursday, Brown's Husband, Sergio Avila Rodriguez was detained by US Immigration and Customs Enforcement in Charlotte. Sergio is now being held at a facility in Georgia.

"I get a phone call and that's when Sergio says to me, 'I've been detained and they are deporting me,'" Brown said.

Sergio escaped Honduras with his family when he was just 6 years old.

Brown says the couple was told by ICE agents that Sergio would be safe from deportation since he is the spouse of a military officer.

The couple married in January 2017.

Brown says they spent thousands of dollars toward Sergio's immigration status and received a series of past waivers to delay deportation - that all now seems pointless.

"I feel trapped and I feel lied to."

Sunday, Brown rallied a group of supporters at St. John's Metropolitan Community Church to express his concern of Sergio going back to a country not supportive of the LGBT Community.

Various allies and supporters from El Centro and Equality NC called on state lawmakers to take action on immigration issues.

Efforts Brown says will ramp up to bring his husband home. He plans to file an appeal for Sergio's deportation order.

"You've messed with the wrong guy," he said.

But US Immigration and Customers Enforcement officials say there are some inaccuracies with Brown's statements.

U.S. Immigration and Customs Enforcement (ICE) initially encountered unlawfully present Honduran national Sergio Avila during a targeted enforcement action in Raleigh April 18. Due to operational considerations, ICE exercised discretion and did not arrest Mr. Avila, but instructed him to report to ICE's Charlotte office in May. He reported May 10, at which time the decision was made to take him into ICE custody due to his status as an immigration fugitive and convicted criminal alien.

Mr. Avila was previously encountered by the U.S. Border Patrol near Rio Grande City, Texas, in September 2001 while attempting to illegally enter the United States. He was subsequently ordered removed from the United States by a federal immigration judge in March 2002. Mr. Avila also has a criminal conviction for Driving While Intoxicated in Durham County in January 2015.

Mr. Avila remains in ICE custody at present pending arrangements for his repatriation to his country of citizenship.

U.S. Immigration and Customs Enforcement (ICE) respects the service and sacrifice of those in the military and the families who support them, and is very deliberate in its review of cases associated with veterans and active-duty service members.

Nationally, 92 percent of all persons arrested by ICE in FY17 either had a criminal conviction, a pending criminal charge, or were already subject to a removal order issued by a federal immigration judge.

Foreign nationals illegally present in the United States are generally not eligible to adjust status through marriage without first leaving the United States. For specific questions about adjustment of status eligibility you will need to contact U.S. Citizenship and Immigration Services.
Report a correction or typo
Related topics:
politicsraleighdeportationiceraleigh newsimmigration
Copyright © 2021 WTVD-TV. All Rights Reserved.
More Videos
From CNN Newsource affiliates
TOP STORIES